Incumbent Executive Director and Ambassador of Indonesia to Pakistan discuss matters of mutual interest including Indonesia’s membership to COMSATS and cooperation for Higher Education with Pakistani institutions. 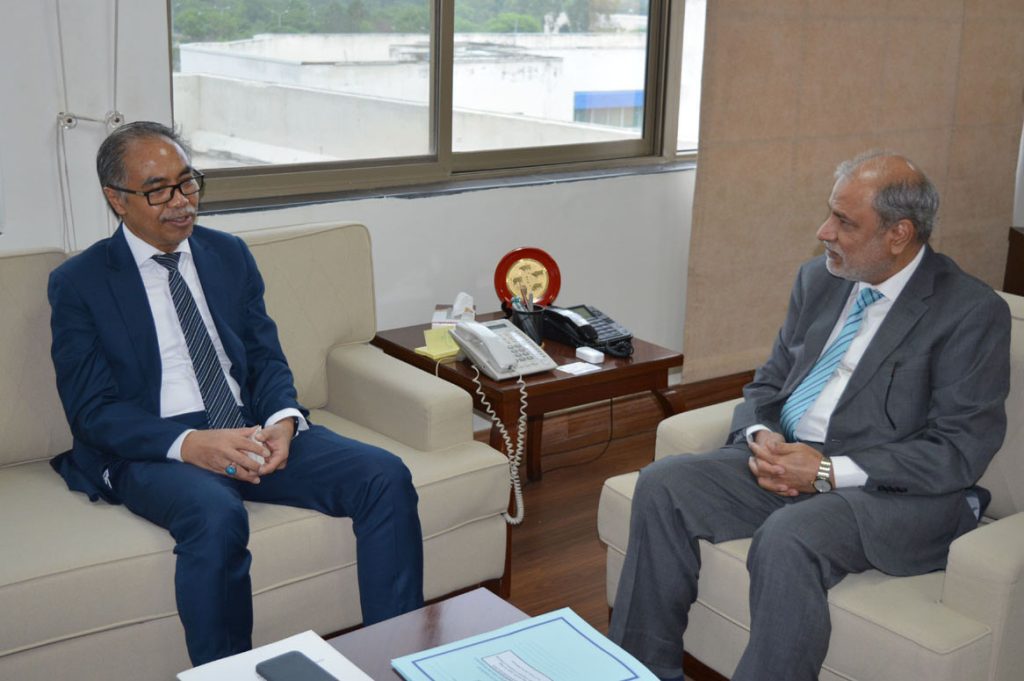 n the incumbent Executive Director of COMSATS, Mr. Ghulam Muhammad Memon, to discuss prospects of collaboration between COMSATS and Indonesia, as well as to explore cooperative ties with Pakistani higher education institutions. The meeting took place at the Ministry of Science and Technology, Islamabad, where Mr. Memon holds the public office as the Federal Secretary. The meeting was also attended by Mr. Irfan Hayee, Deputy Director Programmes at COMSATS, and Ms. Hira Khan, the Information and Socio-cultural Affairs Officer at the Embassy of Indonesia in Islamabad.

During the meeting, Mr. Memon introduced COMSATS to the Ambassador as an organization having multilayered structure that helps perform its role and functions effectively as an inter-governmental organization (IGO) working for S&T-led development. The Ambassador was informed that COMSATS pursues regional development agenda while adopting the South-South and Triangular cooperation mechanisms. He further informed that COMSATS has a vibrant Network of International S&T Centres of Excellence primarily comprising of specialized R&D centres and academic institutions from Member States. Mr. Memon noted that the Sepuluh Nopember Institute of Technology (ITS), based in Surabaya, East Java, is the one of the latest additions to the Network.

Cognizant of the importance of South-South and Triangular cooperation for regional development, Mr. Tugio appreciated the role COMSATS is playing in this regard. He noted that Indonesia is a member of the Association of Southeast Asian Nations (ASEAN). He informed that in 2021, students from over fifty countries were granted around three hundred scholarships by Indonesian higher education institutions, out of which Pakistani students secured the highest number in public sector universities of Indonesia. The Ambassador expressed his eagerness to further strengthening academic ties with Pakistan. He was convinced that social and cultural similarities between the two nations provide an opportunity that needs to be explored. He further informed that he had recently discussed aspects of collaboration in this respect with Dr. Shaista Sohail, the Executive Director of Higher Education Commission (HEC) of Pakistan. 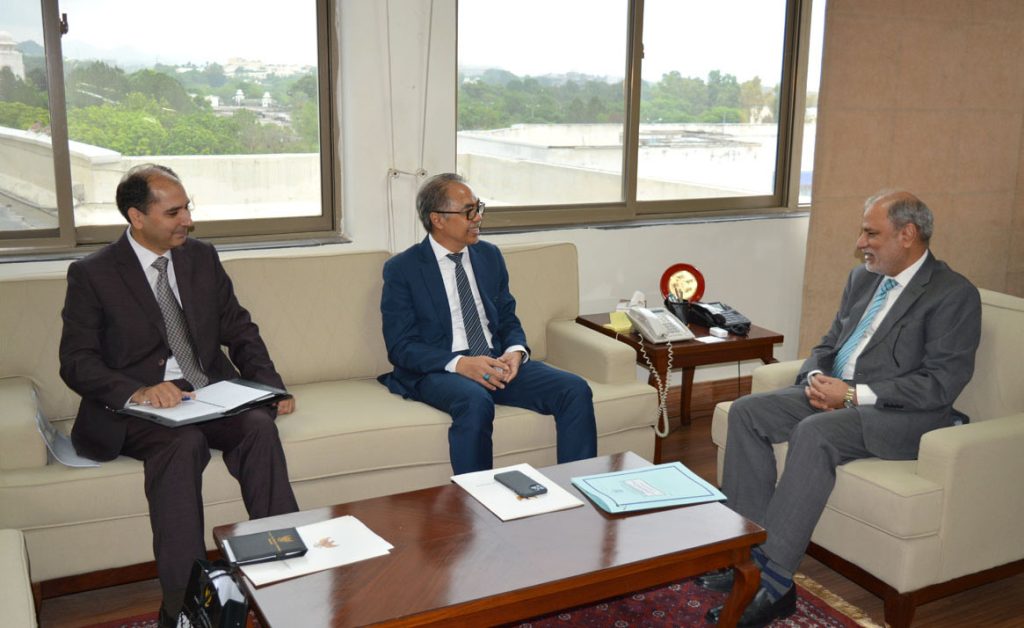 Discussing some of the measures to strengthen academic collaborations with Pakistani higher education institutions, the Ambassador considered it pertinent that Indonesia may be placed on the HEC’s ‘List of Technologically/Academically Advanced Countries for Evaluation of PhD Thesis’. In this respect, Mr. Hayee informed the Ambassador that HEC takes into account status of higher education institutions of a country, in particular worldwide university rankings, academic excellence, field specialization, as well as academic goodwill of the universities. It was noted that the National Quality Assurance Committee (NQAC) of HEC reviews the list regularly in its statutory meetings. Mr. Memon assured COMSATS’ support on the matter and to approach higher authorities of HEC and share relevant information on Indonesian universities for consideration.

Mr. Tugio remarked that potential academic collaboration in the fields of Information Technology and Biotechnology need to be fully tapped. He informed that five research scholars are to proceed to Indonesia for a short fellowship under a programme with the Ministerial Standing Committee on Scientific and Technological Cooperation of the OIC (COMSTECH) in the area of virology. He noted that there are many programmes under ASEAN that provide opportunities not only in the field of education, but also in cultural exchange, trade and commerce. He shared that as Indonesian Ambassador in Pakistan, he promotes the avenues of collaboration with ASEAN countries. He noted that Islamabad, like many developed countries’ capitals, has a good number of think tanks, however, not many are focusing on studying trade relations with ASEAN countries. Mr. Tugio informed that he has been inviting the business community in Pakistan to explore the potential of trade with ASEAN and has also encouraged rectors of Pakistani universities to create ASEAN corner to help facilitate exchanges in this regard. Seconding this idea, Mr. Hayee noted that COMSATS, in the past, supported a similar initiative with Kazakhstan, whereby ‘Al-Farabi Corner’ was established at COMSATS University Islamabad (CUI) in 2019. Mr. Memon also appreciated the idea and offered his support for promoting it through the universities affiliated with his Ministry. The Executive Director also invited the Ambassador to visit CUI for creating strong academic and cultural ties. 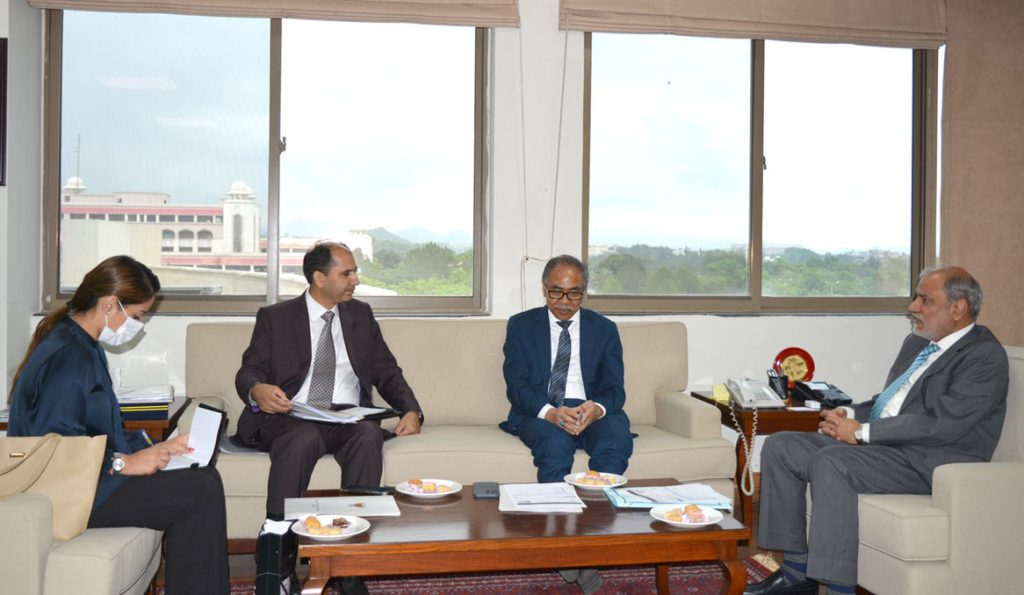 Introducing his country’s strengths, the Ambassador elaborated that Indonesia’s major export commodities are oil and gas, and palm oil. Mr. Tugio noted that his government recognizes the imperative role of universities for creating knowledge economies and has been taking universities as incubators for transforming ideas to reality. The Ambassador informed that, to promote more collaborative ties, his Embassy holds online sessions that focus on history, economics and trade, which he suggested could be utilized by the Pakistani universities.

Mr. Memon thanked the Ambassador for introducing him to unique features and different aspects of Indonesia and the initiatives taken by the Embassy for taking his country’s diplomatic interests further. He noted that in terms of cooperation in the area of science and technology, at present, COMSATS only has institutional ties with the Sepuluh Nopember Institute of Technology (ITS) Indonesia, as member of its Network of Centres of Excellence. Mr. Memon informed that COMSATS has scholarship and fellowship programmes that are offered to benefit students and scholars from its Member States. He noted that COMSATS can upscale these programmes in collaboration with ITS with due involvement and support of the Government of Indonesia. In this regard, the Executive Director deemed it an important step forward to formalize COMSATS’ relations with the Government of Indonesia through signing of an accession agreement. He noted that it will strengthen the objectives of South-South Cooperation, especially in the East Asia Pacific region. Mr. Memon noted that proposals, such as setting up a Center on Advance Research and Innovation on Artificial Intelligence, IoT and Robotics by ITS, can only be realized with the patronage of the Government of Indonesia. In this regard, the Executive Director presented a dossier to the Indonesian delegation containing offer letter to join COMSATS as a Member State along with membership documents and necessary information material. 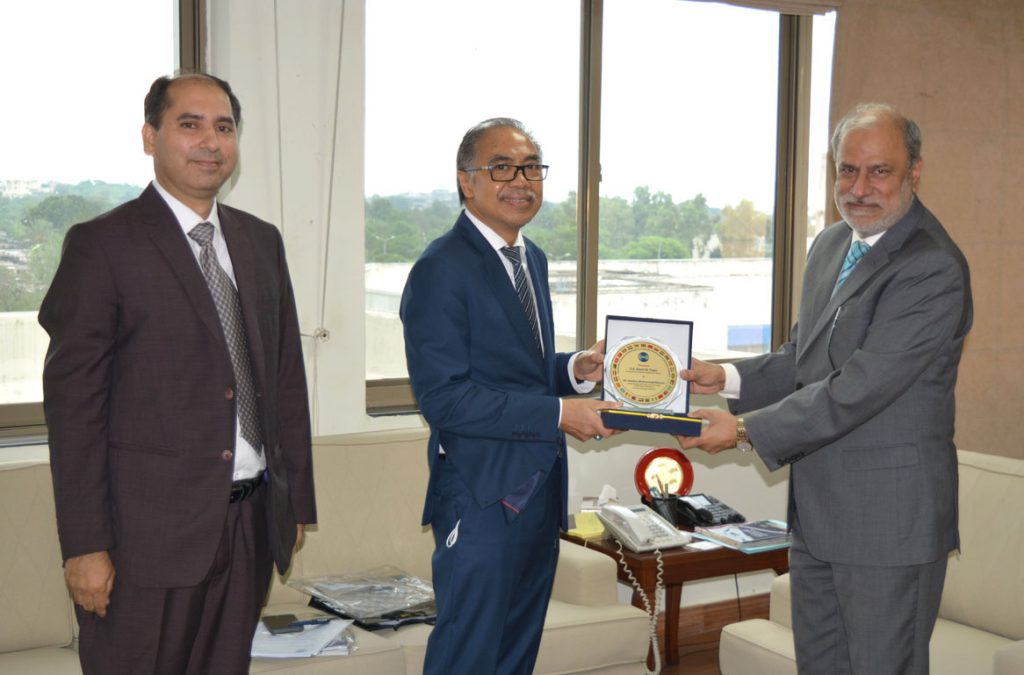 The Ambassador pledged to forward COMSATS’ membership offer to the relevant Ministry in Jakarta for review and consideration. He thanked the Executive Director for his time and the assurances to build ties of Indonesia with COMSATS as well as academic institutions of Pakistan.