The event was attended by about 250 participants belonging to ITI, universities and R&D Centres of Sri Lanka, as well as industry. During her welcome address, Dr. Radhika Samarasekera, Director General, ITI, highlighted her institute’s role development of new technologies and facilitating science, technology and innovation for achieving sustainable development goals in Sri Lanka. 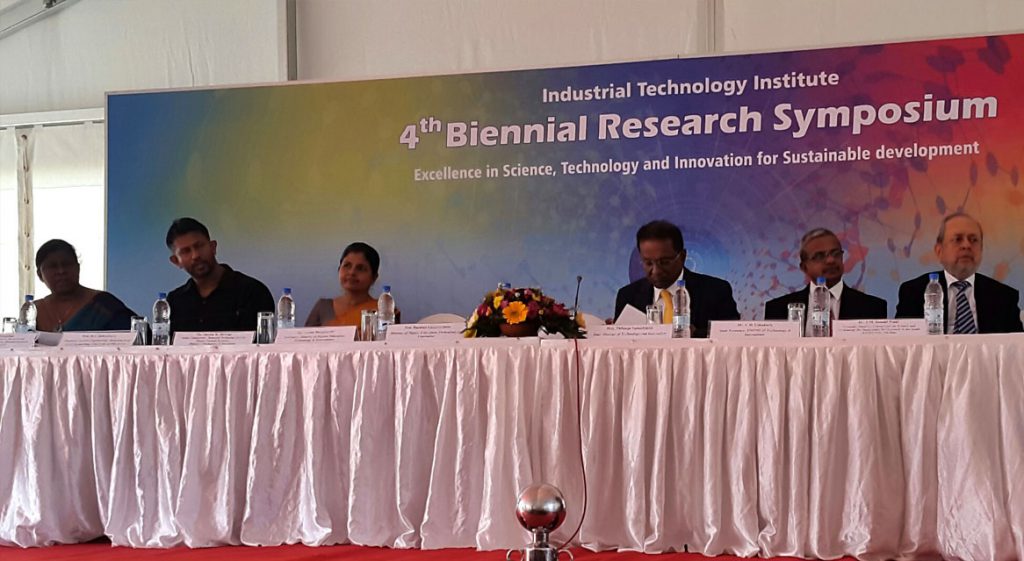 Speaking on the occasion, the Guest of Honor, Honourable Thilanga Sumathipala, State Minister of Technology & Innovation, Sri Lanka, stated that his government is making efforts to transform the country through technology and research. He informed that the roadmap for the country’s development would be based on science, technology and innovation, having tangible targets and set timeframes. He appreciated the services being provided by ITI to the industry.

In his Keynote address, Prof. R.U. Halwathura, Professor of Civil Engineering at the Department of Civil Engineering, University of Moratuwa, Sri Lanka, highlighted the role of science and technology in the socio-economic uplift of the countries. He noted that there are about one billion people who do not have access to safe drinking water, and as a result 5,000 people die every day. Talking about environmental degradation, he informed that the forest cover in Sri Lanka has reduced from 49% to only 16% rendering the country more vulnerable to climate disasters and air quality degradation. He stressed the need for community engagement for developing new technologies to deal with relevant challenges.

He acquainted the participants with the future plans and policies of his government to utilize science, technology and innovation, especially Information Technology, for the socio-economic development of the country. The country, he informed, is making efforts to attract more foreign investment and to enhance high-tech exports.

Participating as a Special Guest, Dr. S.M. Junaid Zaidi, Executive Director COMSATS, introduced COMSATS as an intergovernmental organization of 27 member countries, including Sri Lanka. He underscored the productive collaboration taking place between COMSATS and its Centre of Excellence in Sri Lanka, the Industrial Technology Institute. He laid emphasis on ensuring the requisite infrastructure for supporting innovation in various sectors related to economy. He quoted SLINTEC as an example of a top class research institute of Sri Lanka with expertise and knowledge to offer to other member states of COMSATS. Introducing COMSATS University Islamabad as a top public sector IT institution of Pakistan, Dr. Zaidi offered COMSATS’ support in IT education in member states through establishment of S&T/R&D and higher education institutions.

At the end of the inaugural, a vote of thanks was presented by Dr. Ilmi Hewajulige, Additional Director General ITI. The inaugural also included an Achievement Awards ceremony for the ITI staff, including awards for best research project, best innovation and best commercialization, among others.