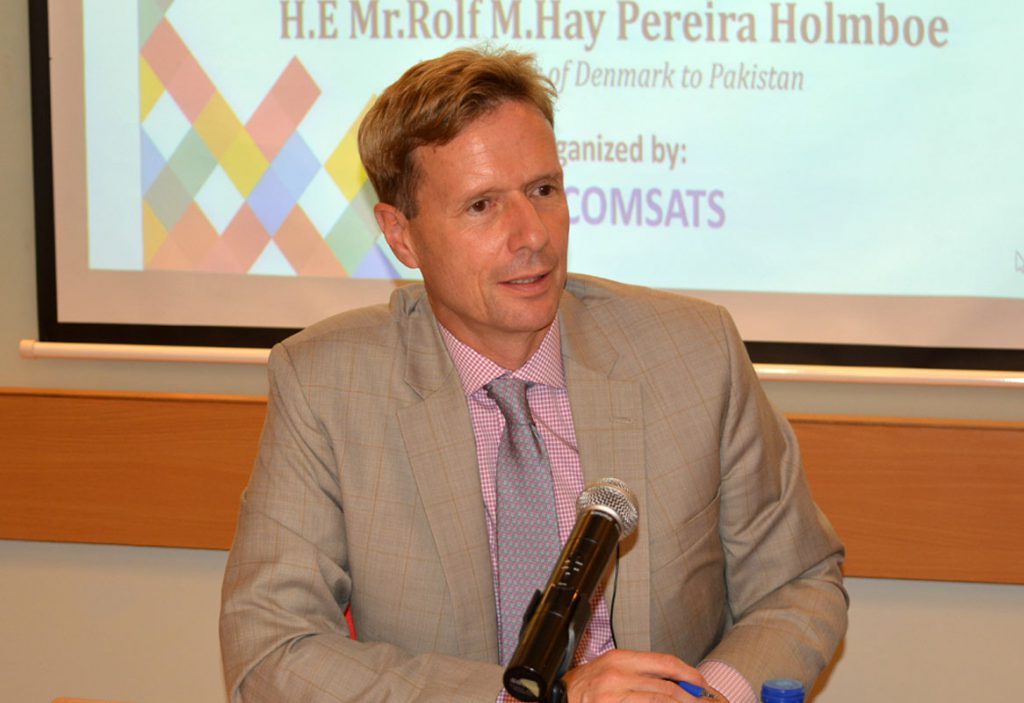 tions” was arranged by COMSATS and the Institute of Peace and Diplomatic Studies (IPD) at COMSATS Secretariat, Islamabad, on 25th September 2019. Delivered by H.E Mr. Rolf M. Hay Pereira Holmboe, Ambassador of Denmark to Pakistan, the talk attracted members of the diplomatic community, academicians, students as well as stakeholders from public and private sector organizations.

In his talk, Mr. Holmboe shared best practices and sustainable solutions that have aided Denmark’s transition towards green economy. He stated that the Government of Denmark has resolved to reduce carbon dioxide emissions and eliminate the use of fossil fuels in automobiles before 2030. In accordance with this, Denmark is investing heavily in R&D for finding sustainable solutions to climate change driven challenges. He also noted 50 percent increased growth in Denmark’s economy since 1990 coupled with proportional decrease in carbon dioxide emissions in the country.

The Ambassador enumerated four aspects imperative for green transition, i.e., energy, water, resources, and cities. In this connection, Mr. Holmboe informed that Denmark is leveraging the potential of renewable energy sources since 1970s when it became the first country in the world to install wind turbines. Speaking of energy transition, the Ambassador informed that Denmark together with Ethiopia had led the track in promoting energy transition towards sustainable means at the recently held United Nations Climate Action Summit 2019, in New York, USA.

He informed that Copenhagen is a part of City40 (C40) which is a cooperative initiative involving capitals and largest cities of the world for finding innovative sustainable solutions and sharing them with economically less stable cities within the C40 group. He stated that cities contribute 80 percent to carbon dioxide emissions; nevertheless, they can offer and invest in sustainable solutions by capitalizing on their resources.

Additionally, the Ambassador considered sustainable production and consumption, waste-to-energy conversion, and effective management of resources important for a country to gain economic competitiveness. In line with this, he mentioned that Denmark has recently established an energy plant that will convert 500,000 tonnes of non-recyclable waste into energy each year. He considered such an initiative relevant for a country like Pakistan which is battling with the challenge of extensive waste production and plastic pollution. He informed that a decade from now, Denmark that currently recycles 90 percent of its waste will leapfrog to 100 percent waste recycling.

Further during the talk, Mr. Holmboe discussed ways that could help a country become carbon-neutral, such as underground stalling of carbon dioxide and its conversion back to coal. Mr. Holmboe expressed Denmark’s willingness to assist Pakistan in adopting sustainable practices in various sectors, in particular, energy and waste management.

The honourable Ambassador was presented with a souvenir at the end of the talk.