Relations Strengthened with the Mauritius High Commission in Islamabad

Home   /   Relations Strengthened with the Mauritius High Commission in Islamabad

The High Commissioner of Mauritius in Pakistan, H.E. Mr. Rashidally Soobadar, called on the Executive Director COMSATS Dr. S.M. Junaid Zaidi, at the COMSATS Secretariat on July 17, 2018. His Excellency was received by Dr. Zaidi and officials of the Secretariat and the Institute of Peace and Development (IPD).

The Executive Director briefed the distinguished guest about COMSATS and its evolution, with a special reference to the organizations flagship projects.

The High Commissioner emphasized the role of South-South Cooperatio 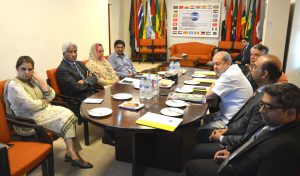 n in view of the challenges faced by the countries of the South. Sharing the key demographics of Morocco, H.E. Rashidally elaborated that Mauritius is an island State that has 1.2 mil population. He noted that since independence in 1968, the country has grown gradually as seen from its GDP that has grown from $200 to over $11,000. The country aspires to achieve the GDP of whereas the $20,000/ by 2030. He also highlighted a number of socio-cultural and historical aspects of Mauritius that boasts 100% literacy rate and offers free education till college level. He presented Mauritius as a multicultural and multi-ethnic society where people believe in peaceful cohabitation, e.g., the biggest mosque in Mauritius is situated in the Chinese neighborhood.

He also informed that the country has a booming tourism industry with 1.5 Million tourists visiting Mauritius last year alone as well as 20 weekly flights to the country by Emirates Airline. He offered Mauritian Government’s willingness to help Pakistan in boosting tourism in the country.

Highlighting the country’s focus for development the High Commissione 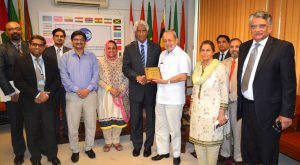 r mentioned Information Technology, FinTech Blockchain, and Artificial Intelligence. He informed that the Government is now focused on Blue Economy and has established exclusive Economic Zones to facilitate foreign investors. He showed keen interest in Mauritian students acquiring scholarships in the fields of Artificial Intelligence and at Pakistani institutions like University of Karachi and NUST.

Dr. Zaidi explored different opportunities of collaboration with Mauritius and apprised the High Commissioner of the Nursing school that was established there with the help of COMSATS. He also mentioned that COMSATS Centre of Excellence ICCBS and COMSATS University work in close collaboration with the University of Mauritius.
At the conclusion of the meeting, Dr. Zaidi handed over the Membership documents and Annual Report of COMSATS to H.E. Mr. Rashidally Soobadar with a hope that Mauritius would consider joining COMSATS as a member state. 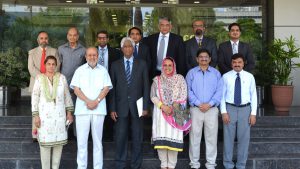