E.D’s Visit to COMSATS’ Centre of Excellence in Brazil

Home   /   E.D’s Visit to COMSATS’ Centre of Excellence in Brazil

The Executive Director COMSATS, Dr. Imtinan Elahi Qureshi, visited Brazil on 21-24 May 2011. During his four-day sojourn, Dr. Qureshi visited Brazilian Agricultural Research Corporation (Embrapa); COMSATS’ Centre of Excellence in Brazil, Embrapa Agrobiologia; and the Brazilian Ministries of Science & Technology and Foreign Relations. The main purpose of the visit was to hold meetings with the officials of important Brazilian institutions to discuss cooperation in the field of science and technology; participation in programmes and projects of COMSATS, and to extend COMSATS’ Membership offer to the Government of Brazil. 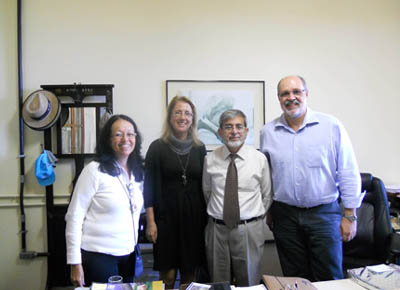 biologia, Dr. Eduardo Campello. The two officials, inter alia, discussed the role that the Centre is playing in the development of environmental friendly agricultural techniques and practices in Brazil. Later, during a visit to the Centre, Dr. Qureshi availed the opportunity to make a first-hand assessment of the scientific capacity of this Centres of Excellence affiliated with COMSATS.

Dr. Campello accompanied the Executive Director to the Brazilian capital, Brasilia, where meetings were held with Mr. Ademar Cruz Junior, Head of ST&I Division, Brazilian Ministry of Foreign Relations and Dr. Carlos A. Nobre, National Secretary of Brazilian Ministry of Science and Technology. A letter of invitation for Brazil to join COMSATS was presented by Dr. I.E. Qureshi, in his meeting with Dr. Carlos Nobre. The role and activities of COMSATS in creating links among the scientific institutions of the developing countries was highlighted by Dr. Qureshi, while stressing that Brazil can play a leadership role in South-South cooperation in the Latin American region, through the platform of COMSATS. Brazil can also strengthen its scientific cooperation with African countries by using the channels provided by COMSATS as nine African countries are COMSATS’ Member States. Dr. Nobre, who is himself a reputed environmental scientist, was very appreciative of COMSATS’ programmes, especially its multi-national ‘Thematic Research Groups’ launched recently in areas of highest concern to the developing counties. Dr. Nobre was informed that a reputed R&D Centre of Brazil, Embrapa Agrobiologia, is already affiliated with COMSATS’ Network of International S&T Centres of Excellence and providing excellent support to COMSATS’ activities. The Director General of Embrapa Agrobiologia, who was present during the meeting, endorsed the effectiveness of COMSATS in S&T capacity-building programmes. The full membership of Brazil, he believed, would enable COMSATS to further increase Brazil’s scientific cooperation with other developing countries not only in South America but also in Asia and Africa.

Later during the visit, Dr. Qureshi met Dr. Maurício Antônio Lopes, Executive Director (R&D) of Embrapa and exchanged views on the possibilities of technology-transfer from Embrapa in the field of ecological agriculture for the benefit of COMSATS’ Member States. The Executive Director of Embrapa offered the facilities of its 40 research centres for training and research cooperation under the auspices of COMSATS.