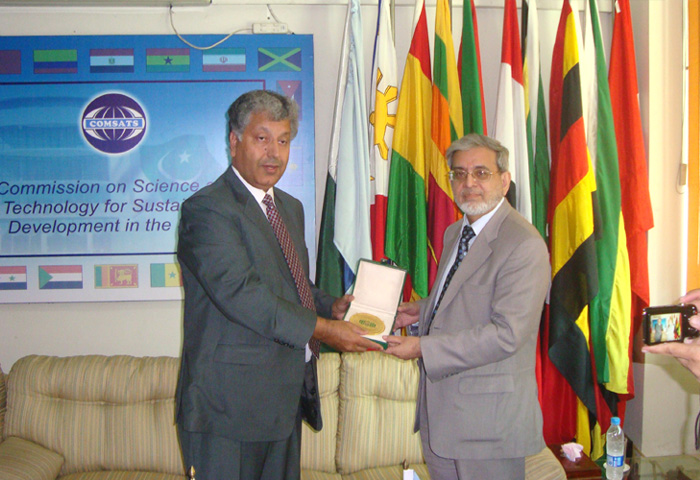 d the Commission on Science and Technology for Sustainable Development in the South (COMSATS) the ‘ISESCO Medal’ on September 26, 2012. In keeping with its tradition of promoting and fostering academic excellence, scientific capacities, and inter-cultural relations through awards and prizes, ISESCO on its 30 years of operations is awarding these medals to selected partner organizations that have collaborated with it for S&T-led development over the years; ISESCO has over 160 partner organizations around the world.

The Medal was awarded in a small ceremony held at COMSATS Secretariat. On behalf of ISESCO, the Deputy Director General ISESCO, Dr. Mukhtar Ahmed, presented the medal to the Executive Director COMSATS. Apart from the officials of COMSATS Secretariat, representatives of the Ministry of Science and Technology (MoST), Government of Pakistan; COMSATS Institute of Information Technology (CIIT); COMSATS Internet Services (CIS); and representatives of print media attended the ceremony. Notable among these were: Mr. Amjad Hussain, Joint Secretary (International Liaison), MoST; Dr. Tariq ur Rahman and Dr. Abdul Aziz Khan, Advisors to CIIT; and Mr. Asim S. Husain, CEO CIS.

Giving an introduction to ISESCO, Dr. Mukhtar noted that ISESCO aims at the development of its 51 member states viz. education, science and culture. To accomplish its development initiatives, the organization seeks collaboration with organizations of similar mandates, such as COMSATS, UNDP, COMSTECH and UNESCO. Based on common interests, ISESCO undertakes scientific activities with these organizations in common member states under short to mid-term collaborative arrangements. ISESCO, thus, organizes 300 to 350 scientific activities in member countries every year. Dr. Mukhtar expressed pleasure on Turkey’s willingness to join COMSATS that was recently substantiated through an agreement signed by COMSATS Secretariat and the Turkish Embassy in Pakistan. Presenting the Medal to the Executive Director COMSATS, Dr. Mukhtar noted with great appreciation the scientific initiatives taken by COMSATS Secretariat under his able leadership.

Speaking on the occasion, the Executive Director COMSATS thanked ISESCO for it generous recognition of COMSATS’ efforts. Recalling the strong working relations with ISESCO, Dr. Qureshi noted that during the last five years COMSATS has organized 15 scientific capacity-building events in collaboration with ISESCO that benefited scientists, researchers and policy makers belonging to 26 developing countries, based on an in-house survey. He further stated that these events have been based on selected themes of direct relevance and importance to the socio-economic conditions of the developing countries, such as Repair and Maintenance of Scientific Equipment and Internet Security. Dedicating the medal to his team, Dr. Qureshi lauded their hard work and dedication in pursuit of COMSATS’ mission. He also thanked the Ministry of Science and Technology for its support to COMSATS and its programmes and projects.