As a follow-up of the application received from Industrial Technology Institute (ITI), Sri Lanka, for joining COMSATS’ Network of International S&T Centres of Excellence, the Executive Director COMSATS, Dr. I.E. Qureshi, visited this Institute in Colombo on April 11-12, 2013.

Welcoming the Executive Director, the Chairman Board of Management ITI, Prof. Vijay 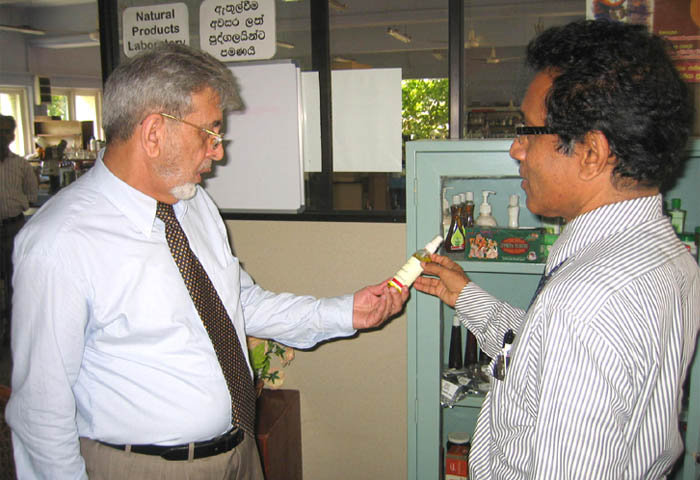 a Kumar, expressed the desire to expand ITI’s international role through different bilateral and multilateral fora, including COMSATS. He thanked Dr. Qureshi for the invitation to participate in the 16th COMSATS’ Coordinating Council meeting to be held on May 2-3, 2013, in Accra, Ghana, where he will present ITI’s case for induction in the Network of International S&T Centres of Excellence. Prof. Kumar explained that, following the acceptance of ITI in the Network, the Director (CEO) ITI will be nominated as a member of the Coordinating Council. Before inviting the Executive Director COMSATS to visit the laboratories at ITI, the Director ITI, Dr. G.A.S. Premakumara, gave a briefing about the scope of R&D activities and services being provided by the Institute, in the presence of his senior colleagues. Dr. Premakumara informed that ITI was established in April 1998 as a successor of Cylon Institute of Scientific and Industrial Research (CISIR), with a mandate to elevate the technology capacity in Sri Lanka to the level required for rapid industrialization.

It was further noted that the R&D work in ITI is distributed in four sections, which are related to Food Technology, Environment Technology, Herbal Technology, and Materials Technology. A Biotechnology Unit established at ITI, in 2009, is dedicated to undertaking research and providing services in the fields of Molecular Biology and Biotechnology. A wide array of equipment is available in the Unit for providing services such as: testing genetically modified (GM) organisms and products; development of plant tissue culture techniques; microbial identification through sequences of Ribosomal Ribonucleic Acid (rRNA) genomes; etc. Other laboratories of ITI that provide services to local industry include; Chemical and Microbiological laboratory, Materials laboratory, Industrial Metrology laboratory and Electrotechnology laboratory.

The Industrial Technology Institute is centrally located in Colombo with all of its laboratories adjacent to each other. The Institute’s strength of permanent staff is 329; seventy per cent of which are employed in technical divisions, while the rest work in support divisions. Out of the total of 79 research officers in both categories of divisions, 56% possess post-graduate qualifications. The visit to laboratories was conducted by the Director ITI, while the activities of relevant sections were described by Section Heads. A survey of the whole complex gave strong indication of focussed activities, qualified workforce and well-equipped laboratories. All instruments, even if as old as 30 years, were found to be in perfect working condition.

The Institute has a plan to partially move in a new and more spacious complex of laboratories and pilot plants, which is located in Malambe, at about 12 kms from the Institute’s present location. The Chairman ITI was kind enough to escort the Executive Director COMSATS to premises of the complex that is under-construction. A brief about the on-going construction activity was given by the former Director ITI, currently the In-charge of the construction project, Dr. A.M. Mubarak. He explained that the administration building, as well as the halls of the pilot plants have been completely constructed, while a five-storey building, housing most of the laboratories, has been built only up to three levels. Funds amounting to SLR 70 M (≈ US $ 550,000) have been allocated for the year 2013 to furnish the laboratories and provide essential utilities therein. It is expected that a ‘model laboratory’ will start functioning in the main building by 2014, while the remaining construction work of the complex will continue.

The plans for the Institute’s development and its existing infrastructure, leaves little doubt that ITI is well-placed to play an active role as a Centre of Excellence of COMSATS. In order to explain how COMSATS operates for the development of its Member States, Dr. Qureshi delivered a multimedia presentation to the senior members of the Institute. After a brief summary of COMSATS’ history, organizational structure and S&T capacity-building programmes conducted in recent years, it was emphasized that ITI can benefit from its Network membership by entering into collaborative projects with other members of the Network. An excellent opportunity for this, it was noted, is provided during the annual meetings of the Coordinating Council.