Meetings and Visits of COMSATS’ delegation in Tunisia

Home   /   Meetings and Visits of COMSATS’ delegation in Tunisia

A delegation of COMSATS, comprising of Executive Director and Advisor (P

rogrammes) COMSATS, held a number of meetings with Tunisian authorities and Heads of scientific organizations during the period 9th to 12th December 2013. The objective of these consultations was to prepare a roadmap for closer cooperation between Tunisia and COMSATS; in particular, to explore the possibility of inducting a Tunisian R&D organization in the COMSATS’ Network of International S&T Centres of Excellence.

In a meeting held with the honourable Minister for Higher Education and Scientific Research, H.E. Dr. Moncef Ben Salem, at his office in Tunis on 11th December, the Executive Director apprised the Minister about the past interactions of COMSATS with Tunisia and explained various benefits that Tunisian scientific community can derive from the organization. The Minister was also briefed about the visit of COMSATS’ delegation to the Water Research and Technologies Centre (CERTE) in the techno park of Borg-Cedria in Tunis on 10th December. The Minister was informed that Director General CERTE has shown interest in getting COMSATS’ affiliation for his institution as one of its Centres of Excellence.

In his remarks, the Minister thanked COMSATS for organizing a scientific workshop in Tunisia in 2012, and especially the on-going workshop on Internet Security. He expressed his willingness to give approval of the Ministry to let CERTE apply for membership of COMSATS’ Network. While responding to COMSATS’ request for Tunisian Annual Membership Contribution, he informed the delegation about the political uncertainty in his country at present and the need for the concurrence of Tunisian Ministry of Finance for any financial contribution. However, he showed his personal conviction that COMSATS is an effective platform for delivering substantial benefits to Tunisia and agreed to record his recommendation for membership payments in future. 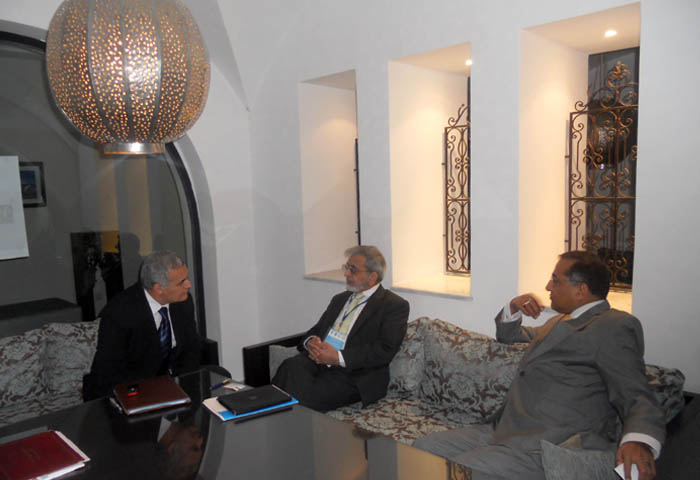 with the Director General CERTE and his senior colleagues at the Centre. The presentations on the organisational structure and technical activities of COMSATS and CERTE were made by Executive Director COMSATS and Director General CERTE, respectively. It was learnt that CERTE has extensive research activities in the fields of geo-resources of water, natural water treatment and waste water treatment. The Centre has over 300 staff and students with 78 researchers. During the period 2010-12, the Centre produced 248 publications, 30 Ph.Ds and 7 patents in water related technologies. The Director General CERTE, Prof. Mohamed Ben Youssef, and his senior colleague, Prof. Mohamed Ben Amor, then conducted a tour of the laboratories, which were found to be well-equipped with latest instruments and teams of researchers engaged in their laboratory work. The Advisor (Programmes) COMSATS, Mr. Tajammul Hussain, explained to CERTE officials about the process of getting affiliation with COMSATS and the benefits of joining its Network of International S&T Centres of Excellence. He handed over the necessary application documents to the Director General and hoped that the application of membership will be received soon so that the matter could be discussed in the forthcoming Coordinating Council meeting of COMSATS in Tehran in May 2014.

The engagements of COMSATS’ delegation on 9th and 12th of Decemb 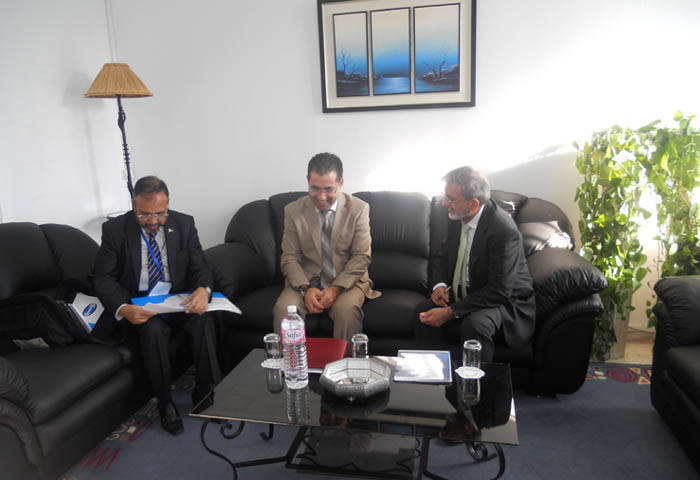 er involved interactions with the authorities of the Higher Institute of Technological Studies (ISET) at Nabeul, which is the host institution for the on-going COMSATS-ISESCO-INIT International Workshop on Internet Security. In a meeting with the Director of the Institute, Dr. Fouad Landolsi, the possibility of an MoU for organising future joint activities was considered. This proposal was further discussed with the Director General of the Institute, Mr. Ali Gharsallah on 12th December. In principle, both the Director General ISET and Executive Director COMSATS showed no reservations on this proposal. In order to work out the details of the MoU, further consultations will be made through e-mails by the Advisor (Programmes) COMSATS, and the Director ISET. A visit to various workshops, teaching laboratories and library was also conducted in order to convey the strengths of training programmes of ISET in different departments of the Centre. It was explained that ISET awards degrees in Mechanical, Electrical and Civil engineering, as well as in Information Technology and Management Sciences. There are over 2,500 students currently enrolled, while there are 210 faculty members. On the occasion of the meetings with ISET officials, it was agreed that COMSATS Institute of Information Technology (CIIT) and ISET will consider the possibility of cooperation in teaching and research programmes. In particular, the Information Technology (IT) department of ISET will look into the possibility of joining COMSATS’ International Thematic Research Group (ITRG) on ICTs.

On the whole, the visit of COMSATS’ delegation and meetings with Tunisian scientific community created a strong good-will towards COMSATS and earned appreciation for its programmes aimed at promoting South-South cooperation in the domain of Science & Technology. Also, commitments were made by Tunisian scientists and officials to strengthen relations with COMSATS and to participate actively in its future activities.