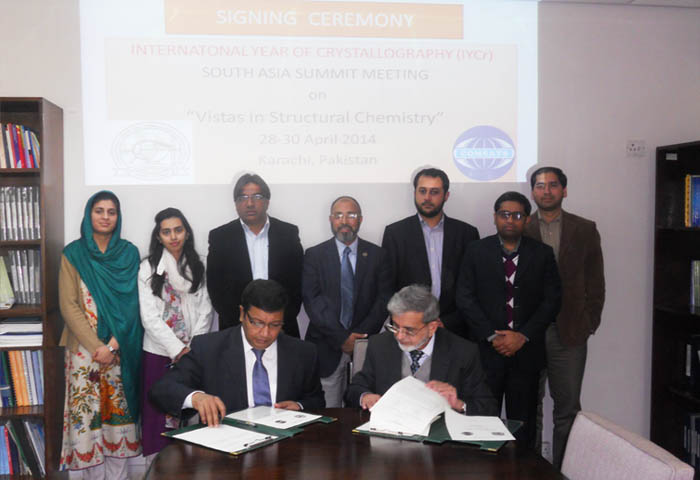 through technical and popular scientific talks, and make it possible for students and general public to understand the role of crystallography in human progress. Among other partners of this international event are the Ministry of Science and Technology, Government of Pakistan; Pakistan Academy of Sciences, Pakistan; Chinese Academy of Sciences, China; and Indian National Science Academy, India.

The Executive Director COMSATS, Dr. Imtinan Elahi Qureshi, and Director ICCBS, Prof. Dr. M. Iqbal Choudhary signed the agreement on behalf of their organizations during a brief ceremony held at COMSATS Headquarters, Islamabad. The ceremony was witnessed by other officials of COMSATS Headquarters, including Advisor Programmes, Mr. Tajammul Hussain. According to the understanding reached, COMSATS has agreed, inter alia, to invite and manage nominations from Member States of COMSATS for participation in the Summit, and sponsor air travel for the selected participants. The responsibilities of ICCBS on the other hand pertain to the overall organization and administrative matters of the event, which include ensuring participation of scientists, researchers, academicians, and practitioners from relevant international and national organizations; necessary consultation and coordination with all partner organizations, and documentation of the event proceedings.

Speaking on the occasion, Dr. Choudhary gave a brief history of the discovery 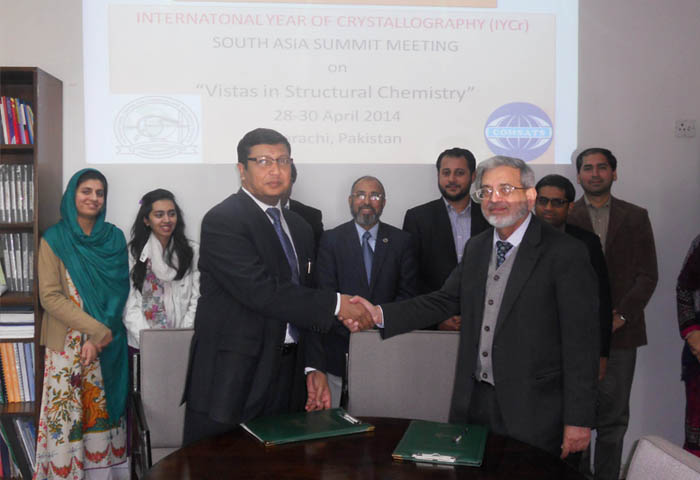 of X-rays and application of X-ray Crystallography in modern sciences, such as material sciences, metallurgy, chemistry, and biology. He noted that today X-rays are being used to help solve major puzzles in science like understanding molecular structures of viruses and various medicinal compounds. He considered the Regional Summit an important step towards popularizing Crystallography as an important field of science having important impact on other fields. He noted with satisfaction ICCBS’ partnership with COMSATS for the event and lauded the timely efforts being made by the Headquarters.

Dr. Choudhary informed that one of the technical partners of the event, Bruker Corporation, would be holding a 12-day workshop on X-ray diffraction, during which two foreign experts would train a select group of masters-level Pakistani students. He believed this workshop would be important in developing interest of young scientists in the field. One hundred and fifty scientists and students are expected to benefit from the event.

In his capacity as the leader of COMSATS’ International Thematic Research Group on ‘Natural Products Sciences’, he informed that collaborative work on the joint research project on ‘Drug Discovery from Nature for Neglected Diseases’ is in progress and currently samples are being collected. He noted with satisfaction the regular meetings of the Group held in Pakistan, Iran, and Turkey, and informed that the next meeting of the group is expected to be held in Cyprus, Turkey.

Dr. Choudhary also sought the support of COMSATS Headquarters in helping ICCBS acquire the status of a UNESCO Category II Research Centre, for which the process has already been initiated. 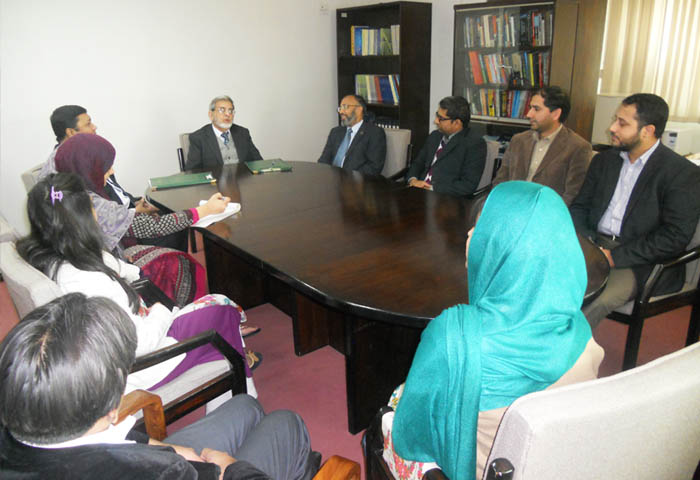 quarters and recalled to the participants of the meeting his affiliation with COMSATS in the capacity of the ‘Distinguished Professor’ of COMSATS. Introducing Dr. Choudhary to his team, Dr. Qureshi assured him of all the possible assistance from COMSATS Headquarters. He noted that facilitation to all its Network members is one of the most important responsibilities of the organization. The idea behind affiliating the institutions from the developing world as ‘Centres of Excellence’ of COMSATS, he added, was to enhance their international statures, in which COMSATS has considerably succeeded. He also highlighted that COMSATS-TWAS publication of profiles of Centres of Excellence ‘Excellence in Science’ has played an important role in promoting these Centres. Dr. Qureshi also believed that research breakthroughs to be made by these Centres through the International Thematic Research Groups are going to be lasting contributions to S&T-led development.

The Summit Meeting on “Vistas in Structural Chemistry” is expected to bring together chemists and biologists from Afghanistan, Bangladesh, China, India, Nepal, Pakistan, Singapore, Sri Lanka and Vietnam. Funding models, top-down and bottom-up approaches, large crystallographic facilities, regional collaborations, and an increase in individual-to-individual interactions in these countries will be among the proposed topics to be discussed during this regional event.