The President of Ghana Briefed about COMSATS’ Programmes

Home   /   The President of Ghana Briefed about COMSATS’ Programmes

A meeting was held in Accra, Ghana on 9th June 2014 with the President of the Republic of Ghana, H. E. Mr. John Dramani Mahama, in his capacity as the Chairperson of COMSATS. The Executive Director C 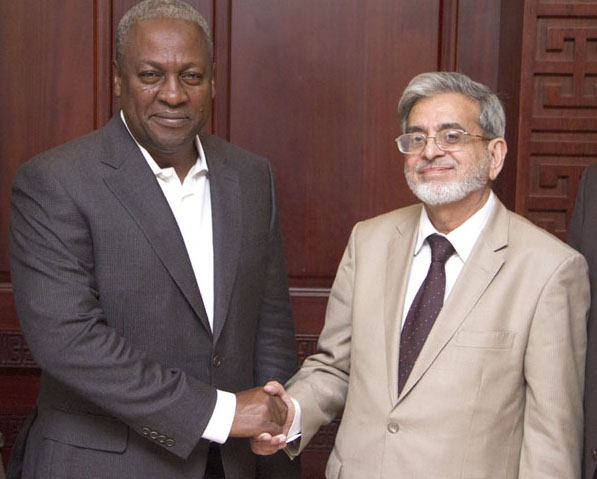 OMSATS, Dr. I. E. Qureshi, who especially undertook the visit to the country, made a presentation on the ongoing research and capacity-building programmes of COMSATS in its Member States. The meeting that lasted for more than an hour was also attended by the Minister, H.E. Dr. Joe Oteng Adjei, and Deputy Minister, Dr. Musheibu Mohammed-Alfa, of the Ghana’s Ministry of Environment, Science, Technology, and Innovation (MESTI), as well as the Director-General of COMSATS’ Centre of Excellence in Ghana, the Council for Scientific and Industrial Research (CSIR), Dr. Abdulai Baba Salifu. Other senior officials of MESTI present on the occasion were its Chief Director, Dr. Sylvester Anemana, and Director (Science, Technology and Innovation), Dr. Yahuza Mohammed Gomda.

In a media briefing prior to the meeting, the Honourable Chairperson of COMSATS remarked that the importance of S&T for the development of any country is well established. However, the relevant capacity-building requires allocation of significant financial resources. The role of COMSATS in this regard is to help developing countries pool their limited resources for achieving common objectives. In response to Executive Director’s opening words of thanks for the invitation to visit Ghana and to brief the Chairperson about international activities of COMSATS, the Chairperson remarked that he recognizes the efforts of COMSATS Secretariat in meeting the laudable objectives of this organization. He assured that Ghana would make significant contributions towards COMSATS’ activities aimed at promoting South-South cooperation in Africa and beyond, during his tenure as the Chairperson. 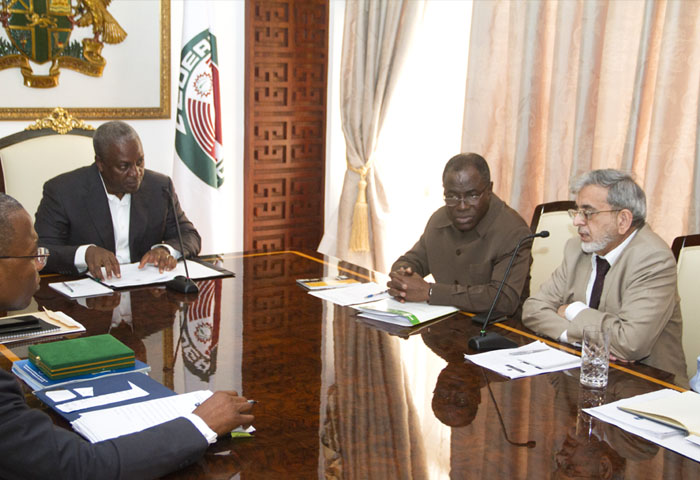 ive Director, which covered the history and mission of COMSATS, the composition and role of its statutory bodies, and its programmes and activities for S&T capacity-building through a Network of 19 Centres of Excellence (CoEs). The Chairperson was told that, in spite of a lean budget and a small team of Secretariat staff, COMSATS has successfully organised or substantially supported over 200 scientific events, for the benefit of scientific communities of its Member States during the last 18 years.

Referring to the 2nd meeting of COMSATS’ Consultative Committee held in conjunction with the 16th meeting of COMSATS’ Coordinating Council, in Accra last year, the Chairperson was informed about a proposal for his consideration recorded in the Rapporteurs’ report, to send personal letters to all Commission members seeking their support for strengthening the technical programmes and financial resources of the organization. As an example of the strong impact that COMSATS’ programmes make in Member Countries, the Executive Director cited the benefits accrued to the Council of Scientific and Industrial Research (CSIR), which is COMSATS’ Centre of Excellence in Ghana, as a result of the workshop on ‘Repair and Maintenance of Scientific Equipment’, held in Accra in August 2013.

Among other benefits that Member Countries can draw from COMSATS mentioned during the presentation included; graduate study scholarships at COMSATS Institute of Information Technology (CIIT), training programmes at selected CoEs, participation in International Thematic Research Groups (ITRG), lectures delivered by Distinguished Professors, help and advice by a panel of experts on ST&I policy, and exchange visits of scientists for exploring bilateral cooperation avenues between Institutes having common research interests.

The advice of the Chairperson was sought on a number of issues relevant to the future activities of COMSATS, which included:

The President also discussed the status of research at BRRI, and gave instructions to the Minister, regarding low-cost construction projects under the supervision of BRRI. For all remaining issues, he instructed the Minister MESTI to take appropriate steps.The Chairperson expressed satisfaction over the performance and achievements o 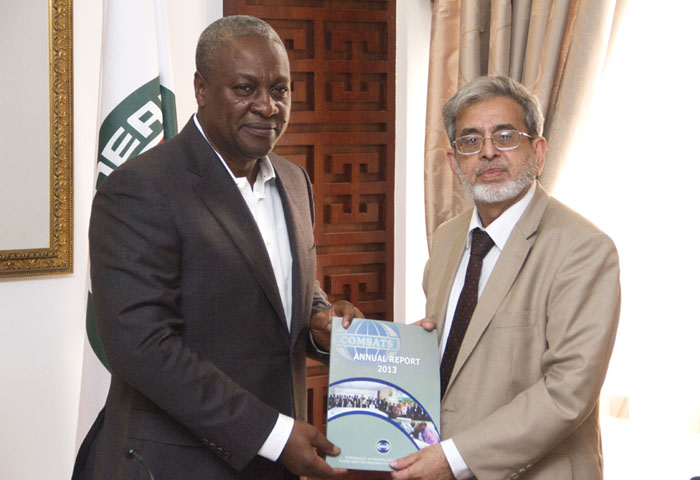 f COMSATS despite its budgetary limitations. He mentioned the possibility of being able to raise funds for COMSATS during the upcoming meetings of ECOWAS and African Union. On his enquiry about the venue of the next Commission Meeting, he was informed that it has to be held in Accra, in view of Ghana holding the Chair of COMSATS. The President gave instructions to start early arrangements for the holding this summit meeting in 2015. Regarding the letter to be sent by him to the other Commission Members, he advised the honourable Minister to submit a draft after getting it vetted by the Ghanaian Ministry of Foreign Affairs.

The Executive Director thanked the Chairperson for his careful and considerate attention towards COMSATS’ affairs discussed during the meeting. He expressed hope that the role and impact of COMSATS as an organization of the developing countries established by the developing countries for their mutual benefit will be enhanced and its financial position will be consolidated under the leadership of the President of Ghana.

The Chairperson concluded the meeting by reiterating his personal commitment to promotion of scientific cooperation among developing countries. He advised the Executive Director to keep up the laudable work being done by COMSATS Secretariat with generous support of the Government of Pakistan. He hoped that other Member Countries would also come forward to provide financial assistance to COMSATS, if they are not doing so already.

The presentation of COMSATS’ shield and submission of COMSATS’ Annual Report 2013 to the President by the Executive Director were also undertaken in the presence of media personnel. 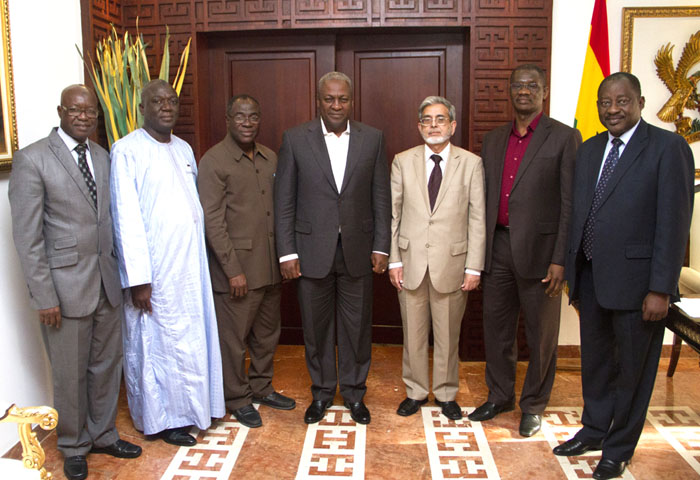