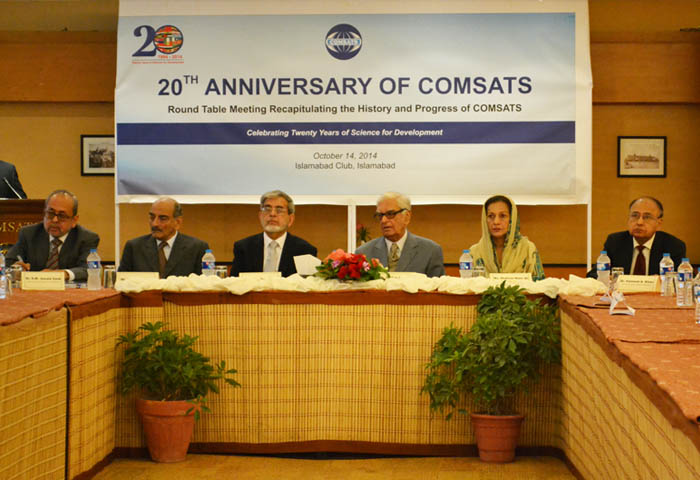 ad on October 14, 2014, which was presided over by Dr. Ishfaq Ahmad, former Advisor to the Prime Minister of Pakistan on Science and Technology, and founding member of COMSATS’ International Technical Advisory Committee. Begum Shahnaz Wazir Ali, President of the Shaheed Zulfikar Ali Bhutto Institute of Science and Technology (SZABIST, Pakistan) and former Special Assistant to the Prime Minister of Pakistan, also graced the occasion with her presence. She had the privilege of signing the intergovernmental agreement on behalf of the Government of Pakistan to establish COMSATS in 1994.

The event had full representation of the ‘COMSATS family’ in Pakistan, including the officials from COMSATS Secretariat, COMSATS Institute of Information Technology (CIIT), COMSATS Internet Services (CIS), COMSATS’ focal ministry in Pakistan, the Ministry of Science and Technology and its affiliated institutions. Also present on the occasion were the former Executive Directors and employees of COMSATS; representatives of COMSATS’ Member State embassies in Islamabad, including China, Egypt, Kazakhstan, Korea D.P.R, Sri Lanka, Sudan and Tunisia; as well as representatives of COMSATS’ international partner organizations.

In his welcome address on the 20th anniversary, the Executive Director COMSAT 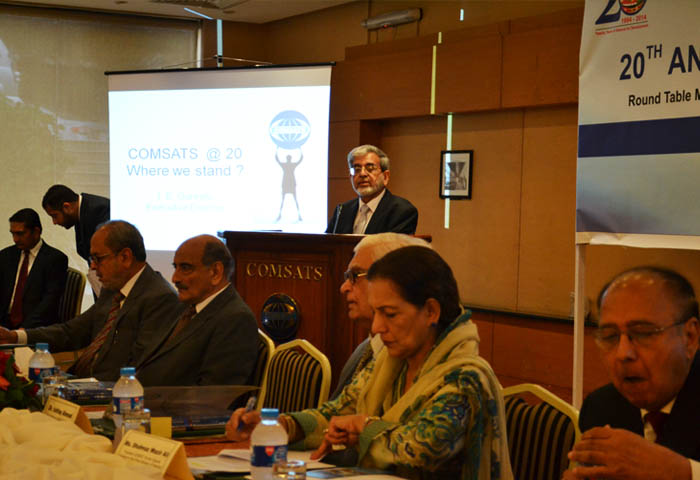 S, Dr. Imtinan Elahi Qureshi, remarked that “COMSATS is vibrant and healthy”. He made a presentation covering the scope, activities, and future aspirations of the organization. He also gratefully acknowledged the presence of worthy guests, some of whom had played key role in the establishment and progress of COMSATS. Dr. Ishfaq Ahmad, he stated, has blazed the scientific skies in the country through his leadership of scientific institutions. In order to achieve the grand vision of COMSATS, he elaborated the multifaceted strategy adopted by COMSATS, including advocacy of the S&T centrality in development process; S&T capacity building, and South-South cooperation. Dr. Qureshi paid rich tribute to the small team of employees, who over the years have been putting their best efforts to the success of the organization. A special mention was made of those who have been associated with COMSATS and have since passed away. During his presentation, he also outlined the key priority areas for the next ten years, which included strengthening of COMSATS Endowment Fund, attaining desired momentum for the International Thematic Research Groups; strengthening advocacy of S&T-led development in Member States; and realizing substantial outcomes for the new and planned initiatives of the organization, such as COMSATS’ Distinguished Professorship Scheme; ST&I Panel of Experts, and COMSATS’ Technology Park.

On the occasion, Dr. Ishfaq Ahmad gave an account of his personal interaction with Prof. Dr. Abdus Salam and considered the establishment of COMSATS to be one of Prof. Salam’s desires that were fulfilled by Pakistan. He recalled how fondly Prof. Salam used to discuss the idea of establishing an organization that would gather a number of developing countries at an international forum created for advocacy of S&T for development. He also acknowledged and appreciated the efforts of Begum Wazir Ali, and the incumbent and former Executive Directors of COMSATS, in their own fields, as well as with regard to the establishment and growth of COMSATS. To further consolidate the international programmes of COMSATS, Dr. Ahmad proposed that the organization should enhance collaboration with policy-related institutions. 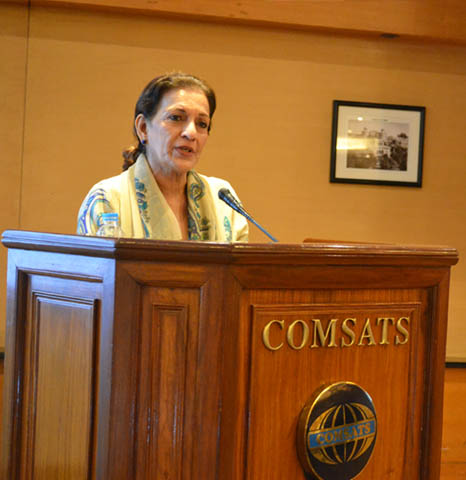 ation of COMSATS. Referring to COMSATS as Prof. Salam’s brainchild, she considered his untimely departure a great loss to the scientific panorama of the country. She was of the opinion that Pakistan has gradually lost the much needed advocacy of S&T. She noted that COMSATS has been single handedly promoting the cause of science and technology for sustainable development in Pakistan. She believed that scientists have a greater responsibility of identifying new ways to finding solutions to the socio-economic problems in developing countries. She was especially appreciative of a number of initiatives taken by COMSATS in Pakistan, which she termed as “strategic”. She offered all her personal and political support for promoting the cause of COMSATS to the relevant quarters of the Government of Pakistan.

The three former Executive Directors present on the occasion noted that the organization has come a long way in realizing the vision of Prof. Salam and showed confidence in the present leadership and programmes of COMSATS. Mr. Parvez Ahmed Butt, the founding Executive Director especially felt intrigued by COMSATS initiative of International Thematic Research Groups (ITRGs), which he believed is prompting the use of scientific research by pooling intellectual resources from the countries of the South for national development. Giving a brief history of the early days, he noted the devotion and sincerity that was put in for strengthening of the organization over the years. In order to improve the efficacy of COMSATS’ programmes, Mr. Butt proposed some key initiatives that inter alia included: measuring and mapping of scientific resources in the member states for honoring the deserving scientists and availability of relevant data for use; and efforts for promoting the correlation between government functionaries, entrepreneurs and researchers, which he referred to as ‘Technology Triangle’, for passing the benefits of S&T advancements to the various strata of the society.

In his remarks on the occasion, Dr. Junaid Zaidi, the founding Rector CIIT shared some of the historic episodes that took place during the Foundation Meeting, and appreciated the catalytic role played by H.E. Mr. B. W. Mkapa, the then Tanzanian Minister for Science, Technology and Higher Education in establishing COMSATS. He noted with pleasure his early contributions towards the organization that included drafting the concept papers on CIS and CIIT. Noting the humble beginning of CIIT in 1998, he shared the success of CIIT over the years, that is manifested through its students enrolment of 35,000, more than 700 research publications during 2014, and the operational budget of 4.7 Billion PKR, most of which is generated by the institute itself. He also shared a brief account of the Founding Meeting of the Board of Governors of CIIT in 2000 and appreciated the guidance of the then members. As for the current standing of the Institute, he attributed the growth of the Institute to the support from the present and former Executive Directors of COMSATS and thanked them for their positive approach. He considered CIIT as an important Centre of Excellence of COMSATS, which bears the organization’s name and called for a special support from COMSATS’ Coordinating Council.

Dr. Hameed Ahmed Khan, gave a brief account of some of the activities undertaken during his tenure as the Executive Director COMSATS from 2000-2008. He acknowledged the contributions of his predecessors and the incumbent Executive Director in making COMSATS a success. In the light of his personal experience over the years, Dr. Khan stated that the key to success of the organization is reasonable planning and efficient implementation. He also advocated a good balance between basic and applied research, as well as the sharing of facilities, experience and manpower among the developing countries, which he believed is what COMSATS has been trying to achieve over the years. 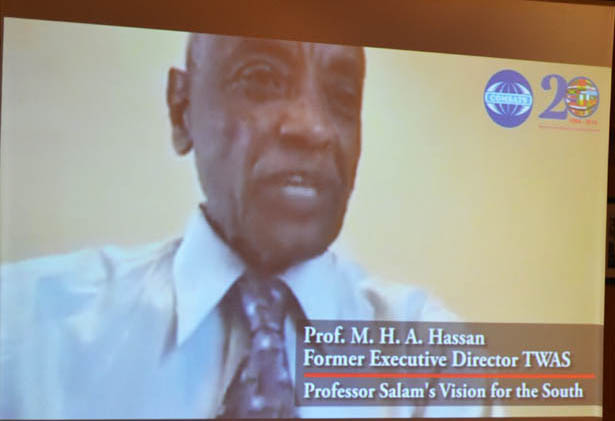 In his video recorded message, Prof. M.H.A Hassan, the former Executive Director TWAS, recapitulated the history of COMSATS. He also recalled that Prof. Abdus Salam was driven by the intense passion of achieving the highest standard of scientific excellence, and changing the working conditions of scientists in the developing world. He noted that Prof. Salam’s idea was to make a Head-of-the-State level commission which had the necessary political backing to implement its programmes and strengthen institutions within each member country with the funds of the country to give sense of ownership to the Centres of Excellence (COEs) rather than making new institutions and trying to find funding from the West. These CoEs would then invest in developing world class researchers.

A message was also read on the occasion by the Advisor (Programmes) COMSATS, Mr. T 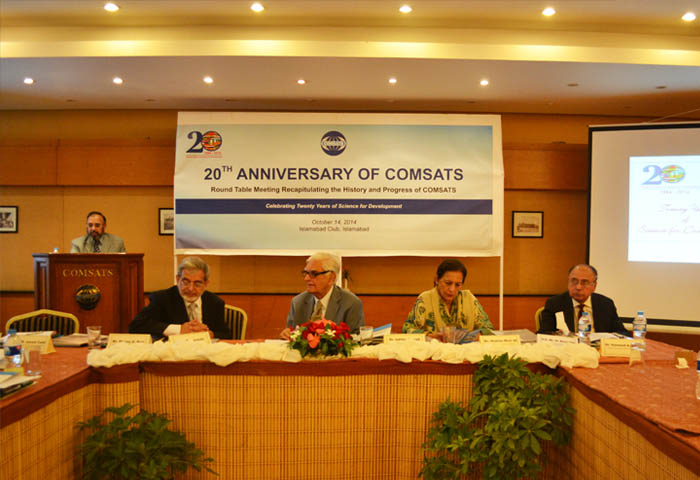 ajammul Hussain from Dr. Eduardo Posada Florez, Director of International Centre of Physics and the Chairperson COMSATS’ Coordinating Council. Dr. Posada remarked that during the last 20 years COMSATS has been playing an increasingly important role in promoting science and technology in developing countries as the central pillar for social and economic development. Dr. Posada was appreciative of the fact that COMSATS’ Network of Nineteen Centres of Excellence, spread in four continents, has been greatly contributing to the international programs of COMSATS, showing that science is the most effective means of promoting real cooperation between nations, above geographical and political barriers. He noted that from the platform of the Council, the Network has been able to carry out exchange of scientific information, explore new avenues of collaboration and possibilities of launching new scientific research programmes. Dr. Posada expressed gratitude to the Government of Pakistan for generously supporting COMSATS Secretariat and the organization’s programmes, and showed full confidence in Dr. Qureshi for his enthusiastic leadership.

Also on the occasion, Dr. Arshad Saleem Bhatti, Dean Faculty of Sciences CIIT, shared his views on the internationalization of science and technology in Pakistan. He emphasized using ‘science diplomacy’ a 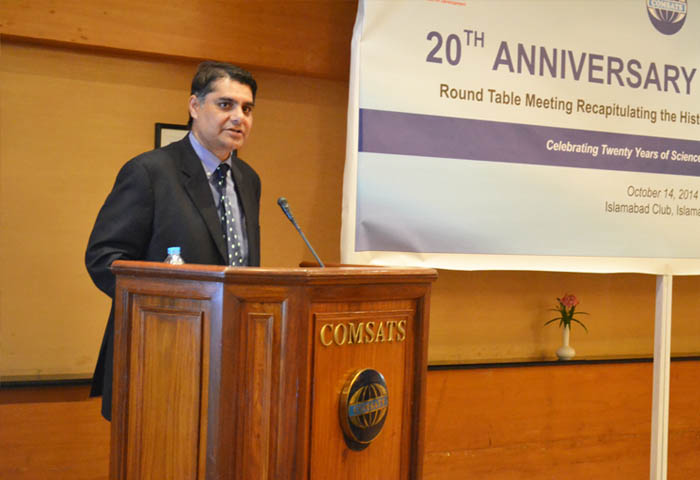 s the means to achieving breakthroughs and creating headways for international scientific cooperation. Dr. Bhatti noted that paradigm shift has taken place in the country, whereby the universities are nowadays better placed to play a bigger role in the national development of the country, especially due to suitable funding and the greater freedom to make their own international agreements and MoUs for scientific collaboration. He cited the examples of CIIT that with the support of Ministry of Science and Technology (MoST) is benefiting from the agreements reached with institutions like University of Illinois at Urbana-Champaign (UIUC), USA, and Tsinghua University School of Sciences (TUSS), China. Dr. Bhatti also noted that as part of its internationalization activities, CIIT has a standing offer of 100 scholarships to students from COMSATS’ member countries, and at present has close to 50 foreign students in its various campuses. He also emphasized the need to be a part of multilateral research activities, such as experiments in CERN and SESME, where a large number of countries participate and bring benefits of their experiences to their scientific communities. He appreciated the role played by Dr. Ishfaq Ahmed who over the years ensured Pakistan’s participation in such international activities.

At the end, a short interactive discussion session steered by Dr. Ishfaq Ahmad an 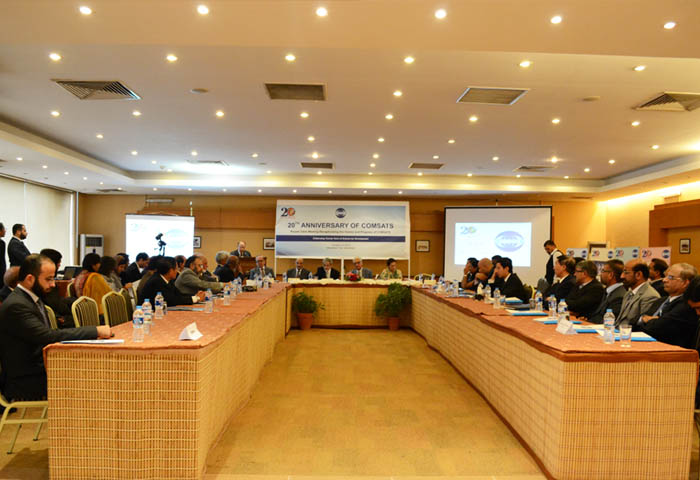 d Ms. Wazir Ali touched upon issues like science and education, North-South divide, open knowledge sharing, and role of S&T in addressing key development issues. Highlighting the relationship between Science and Society, Ms. Wazir Ali called for flexible and adaptive approaches, free of stereo-typing. Dr. Zaidi opined that COMSATS is capable of performing even better if the financial restraints are somewhat relieved, to which Dr. Qureshi assured of utmost efforts and pledged to do more in the future. Mr. Tajammul Hussain considered COMSATS Network a great asset and a possible means to addressing various key issues of the developing countries. Dr. Ahmad in his concluding remarks encouraged all to follow Prof. Salam’s passion for identifying problems and finding their solutions. He noted that “COMSATS is important for scientific scene in Pakistan and we are proud to be associated with it”. 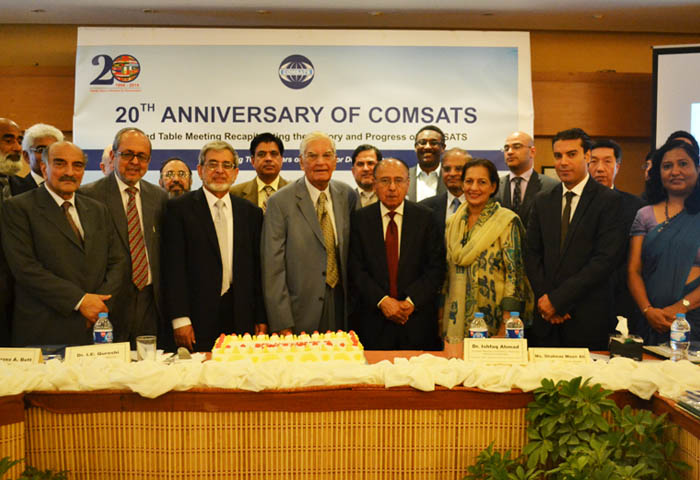