On November 19, 2014, the Ambassador of China to Pakistan, H.E. Mr. Sun Weidong, paid a visit to COMSATS Institute of Information Technology (CIIT), Islamabad Campus, to receive formal briefing on COMSATS and CIIT, and inaugurate the China Study Centre housed at CIIT’s Business Administration Department. The objective of the Study Centre is to facilitate promotion of trade and business between Pakistan and China by providing a platform for cooperation to their entrepreneurs.

The Ambassador was given a warm welcome at the university by the Rector, Deans, Heads of Department, and a large number of students. Prior to the inauguration of China Study Centre, the Executive Director COMSATS, Dr. Imtinan Elahi Qureshi, briefed the Ambassador about the international programmes and activities of the Commission on Science and Technology for Sustainable Development in the South (COMSATS) and its Network of Centres of Excellence for the promotion of Science and Technology in the developing countries.

The Rector CIIT, Dr. S. M. Junaid Zaidi, introduced CIIT to the Chinese delegates and gave a snapshot of the milestones reached by the university in a small period of just over 14 years. He noted that from just 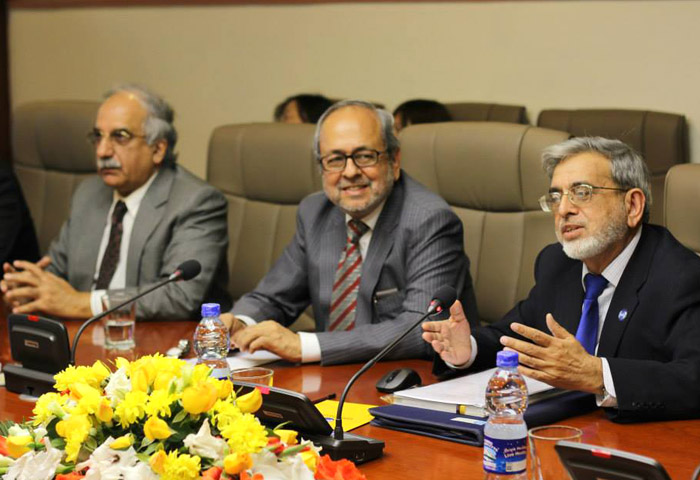 one campus in the year 2000, CIIT has exponentially grown to now have seven fully functional campuses in different cities, as well as a virtual campus in Islamabad, giving the university the envisioned national character. It was informed that the university now has 18 departments, 10 research centres, and offers 96 academic programmes, with faculty and student strengths nearing 2,700 and 35,000, respectively. About its ranking, he informed that the university is among the top five higher education institutions of the country by any standards, and aims at being one of the top 100 universities of the developing world by 2015 and top 500 universities from around the world by 2020. Dr. Zaidi also introduced Pak-China Business Forum, being held for last three years, that is intended to provide a platform to Pakistani and Chinese businessmen and entrepreneurs to explore opportunities for business, Foreign Direct Investment (FDI), and technology transfer. It was informed that during the most recent annual event under the Forum, 200 Chinese companies participated and 70 MoUs were signed between Pakistani and Chinese businessmen. Dr. Zaidi also informed that the Forum will be held on March 27-30, 2015, and requested the participation of the Ambassador.

The meeting concluded on the note of appreciation by the Ambassador for COMSATS and CIIT for their mandate, scope and services. He said, “We will help the university to undertake its academic targets. We are ready to support it both financially and with professional input.” He noted that the university has also done well, in generating business activities, under Pak-China Business Forum. He acknowledged the success of Pak-China Business Forum. The Chinese Ambassador reiterated his support and cooperation in the fields of Science and Technology and Education in order to bring Pakistan and China closer. He appreciated COMSATS’ efforts to strengthen Pak-China long standing relationship, especially in the education sector. 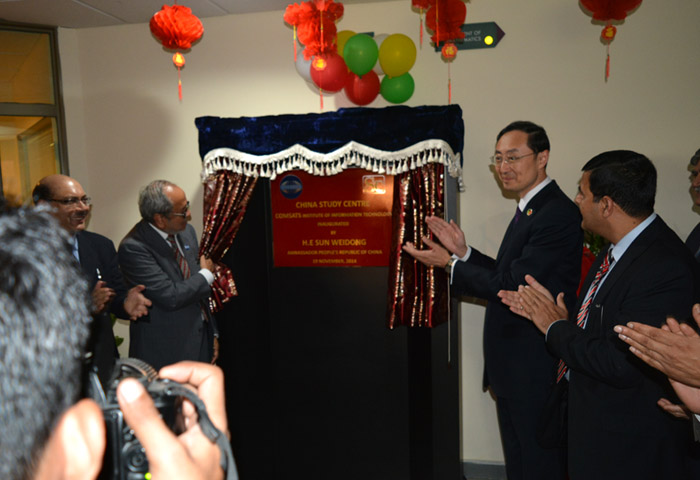 l opening of the China Study Centre. In an interview with media personnel, Ambassador Weidong said that the Chinese government and the leadership attach great importance to their relations with Pakistan. “Our relationship is growing fast with the passage of time, meeting the common aspirations of their people”. Responding to a question, H.E Mr. Weidong said, “It was highly encouraging to see that there is a complete consensus among all sections of the people in the country with regard to further deepening their all-weather and time-tested relationship”.

The oath taking ceremony of the office bearers of the Chinese Universities Alumni Association and China Students Society took place at the Seminar Hall of the Institute and was attended by a large number of faculty members and students of CIIT.

Mr. Jaffri noted the initiatives taken by the Centre, including: introduction of compulsory Chinese language classes for students enrolled in Business programmes; mentorship of students and faculty aspiring to pursue higher studies in China; organization of a number of international workshops and seminars, such as a workshop on “Doing Business with China” in collaboration with Tsinghua University; as well as launching of a talk series, “Learning from China”.

H.E. Mr. Weidong congratulated CIIT for the achievements it has made over the years. He especially appreciated the leadership of COMSATS and CIIT and acknowledged the efforts being made by the China Study Centre to strengthen cooperation between Pakistan and China. He commended the role of Pak-China Business Forum in strengthening the communication and exchanges between the business communities of Pakistan and China.

Addressing the gathering, he shed light on the current status and prospects of China-Pakistan relationship in the background of the economic achievements made by his country. He noted that China’s GDP has jumped from a mere US$ 50 billion in 1978 to US$ 9.3 trillion in 2013, making China the world’s second largest economy. China’s contribution to world economic growth, he informed, now stands at 30%. China’s total imports and exports, it was noted, have reached US$ 4.16 trillion in 2013, ranking first in the world. The Ambassador stated that China has set big future targets for itself. “We also need to implement economic restructuring”, he said, “improve social management, promote people’s livelihoods and protect the environment”. He further noted that Pakistan is bound to benefit from China’s development.

Addressing the students of CIIT, the Ambassador said that people-to-people exchanges are the cornerstone of bilateral relations and youth exchanges are an important part of the process. He noted that such exchanges are deeper and more frequent between China and Pakistan, which can be seen by the fact that around 220 Pakistani students are provided scholarships by Chinese Government to study in China every year, and the number of these scholarships given to Pakistani students is amongst the largest. Mr. Weidong expressed satisfaction in noting that the youth of the two countries are promoting the China-Pakistan friendship.