The COMSATS’ Centre of Excellence (COE) in Jamaica, the International Centre for Environmental and Nuclear Sciences (ICENS), Kingston, Jamaica, opened its doors to welcome Executive Director COMSATS in his maiden visit to the Centre on 23rd March 2015. Located in the picturesque setting of Blue Mountain backdrop, amidst vibrant atmosphere of University of West Indies, Mona Campus, the Centre houses three laboratories dedicated to its core activities pertaining to the chemical analysis of environmental media and food stuff, using nuclear and atomic spectroscopic methods.

The Executive Director, Dr. I. E. Qureshi, was received by the Director-General ICENS, Mr. Charles Nathaniel Grant in the Gerald Lalor building, where the two held detailed discussions on the avenues of incre 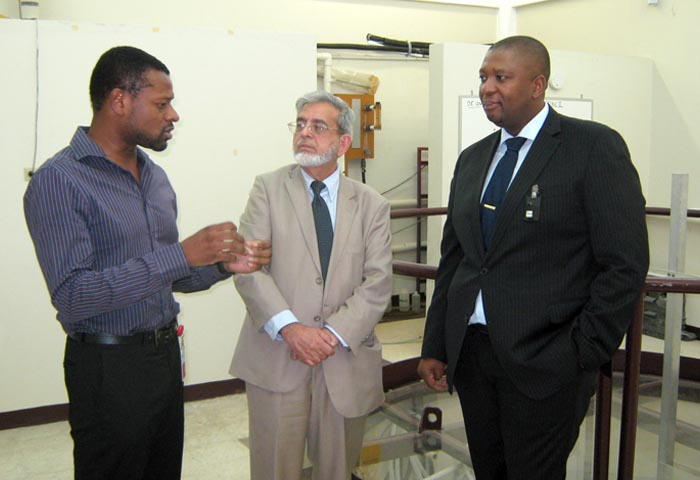 asing participation of ICENS in COMSATS’ International Programmes. In his welcome remarks, Mr . Grant thanked the Executive Director for taking time out to travel to Jamaica and visiting the ICENS facilities. Dr. Qureshi recalled the strong role played by ICENS founder Director-General, Prof. Gerald Lalor, in establishing the COMSATS’ Centre of Excellence in Jamaica as a result of his close contacts with Prof. Abdus Salam. Elaborating the role of COMSATS’ Coordinating Council meetings in facilitating scientific cooperation among Member States, the Executive Director emphasized the need to have representation of ICENS in these annual meetings, in particular, the upcoming 18th meeting to be hosted by the Industrial Technology Institute in Colombo, Sri Lanka, on 12-13 May, 2015. He pointed out that the Council meetings, in which Heads of 19 R&D organizations affiliated with COMSATS participate annually, provide excellent opportunity for exchange of information about S&T activities taking place in COMSATS’ Member States, opening the possibilities of bilateral or multilateral cooperation in areas if common interest. The cross fertilization of ideas in light of presentations on the R&D activities of different COEs have the potential to generate new research programmes or new ways of undertaking ongoing research programmes for the socio-economic progress of developing countries.

In connection with the benefits that ICENS can draw from COMSATS’ international activities, the Executive Director explained three modes of support offered to COEs:

The Executive Director invited the Director-General ICENS to identify scientific areas of interest in which he would like to seek help from COMSATS’ Member Countries, and also to indicate what kind of assistance and training ICENS would be willing to offer to other countries. He offered to provide financial support in the form of travel grant in case of exchange visits of scientific personnel for the purpose of training or joint research activity.

After lunch break, the Honourable Chairman of the Board of Directors of ICENS, Prof. Gerald Lalor was kind enough to join the discussion and gave his candid views on the state of S&T developments in Jamaica. With reference to a proposal that ICENS should act as COMSATS regional hub, he enthusiastically supported the idea, suggesting that international events held in Jamaica under the aegis of COMSATS would be helpful in invigorating local scientific community and also attract attention of authorities responsible for the development of S&T sector. Prof. Lalor emphasized that the policy makers, as well as the general public, need to be sensitized about the importance of S&T capacity building in achieving targets of economic development.

A tour of the ICENS laboratories was conducted by the Director-General, while l 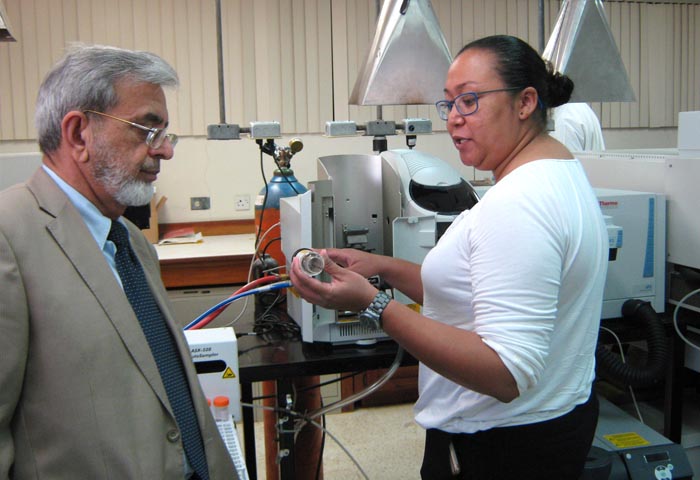 aboratory Heads explained their analytical studies being conducted with the help of X-ray Diffraction, X-ray Flourescence, Atomic Absorption Spectrometry, Neutron Activation and Inductive Coupled Plasma Spectroscopy. A large number of samples of soils and food-items are routinely studied to map the distribution of hazardous elements and their pathways to agricultural produce. The Director-General ICENS explained that a complete atlas of elemental distribution in Jamaican soils covering the entire land area has been prepared with samples taken over a grid of 8×8 kilometers. This work is being further refined over a grid of 2×2 kilometers. He further explained that the neutron source reactor, SLOWPOKE II, available in the Centre, is being refurbished to change its core as per guidelines of the IAEA. The exchange of ideas with researchers and technicians in the laboratory resulted in an understanding that there should be more interaction with other laboratories doing similar work in COMSATS’ Member Countries.

A PowerPoint presentation made by the Executive Director was attended by ICENS personnel, as well as faculty members of the University of West Indies. Learning about the range of COMSATS’ international activities, the participants asked about a number of questions related to financial resources of the organization, procedure of admissions in CIIT, and participation in International Thematic Research Groups. Dr. Qureshi invited them to make full use of the opportunities offered through COMSATS’ programmes by finding details available on the web-site and write articles for Science Vision.