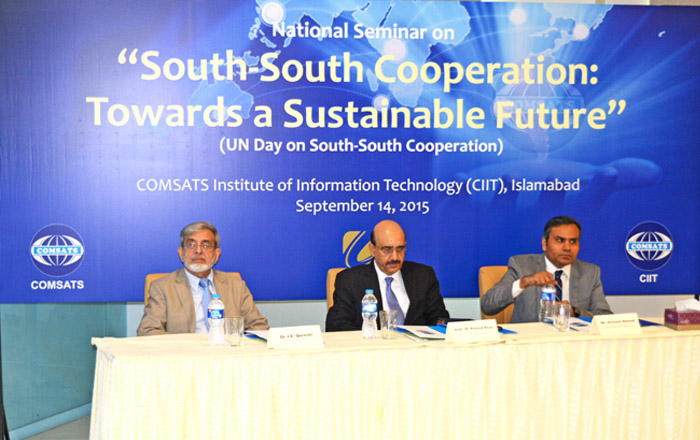 th (COMSATS) in collaboration with the Centre for Policy Studies (CPS) of COMSATS Institute of Information Technology (CIIT) held a National Seminar on ‘South-South Cooperation: Towards a Sustainable Future’, in Islamabad, on 14 September 2015, to commemorate the UN Day for South-South cooperation (September 12, 2015). The chief guest of the seminar was Director-General Institute of Strategic Studies Islamabad (ISSI), Ambassador (R) Masood Khan, while the Executive Director COMSATS, Dr. I.E. Qureshi; and Assistant Country Director and Chief Development Policy Unit of the United Nations Development Programme (UNDP), Mr. Shakeel Ahmad participated in the event as speakers in the inaugural session. There were more than 65 participants in the seminar, including, diplomats, academicians, scientists, economists, CIIT faculty and students, as well as representatives of media and civil society. The inauguration was followed by a technical session comprising of highly informative talks by four eminent speakers.

Ambassador Khan in his inaugural address noted that the success of Sustainable Development Goals (SDGs) will largely depend on judicious utilization of both the South-South cooperation and triangular cooperation mechanisms. He was of the view that to realize SDGs, the UN and other development agencies of the world now need to have greater focus on the developing economies, considering that in the future the bulk of the middle class would be living in the South. He noted that in the past, financial support from the developed nations in the form of Official Development Assistance (ODA) has benefited some developing countries on one hand, and led to chronic over-dependence of some, on the other. He remarked that the North must continue to fulfill its obligation towards ODA to the developing economies; nonetheless, the South should make sincere efforts to fully exploit its indigenous resources for its development. He opined that South-South cooperation is and should remain a level playing field for the developing countries. Pakistan, he added, needs to make conscious efforts to benefit from South-South cooperation, such as Pak-China Economic Corridor, which he noted is the largest South-South cooperation programmes. He opined that Pakistan as a developing economy should endeavor to re-position itself as a regional hub for trade and commerce, and needs to go global as far as trade is concerned. The country should find new markets in Africa, East Asia and other parts of the world for its goods and services, while simultaneously opening up for bilateral trade with other developing economies. The country should tap the potential of science and technology for accelerated development and fully exploit R&D in emerging technologies, such as biotechnology and nanotechnology. He concluded with the hope that COMSATS would continue to play a transformative role with other UN agencies in meeting the global sustainable development agenda.

Earlier in his welcome address, the Executive Director COMSATS thanked Ambassador (R) Masood Khan for gracing the occasion with his presence and recalled his enormous services to the country as career diplomat. He noted that South-South cooperation is a broad term which has replaced the earlier concept of ‘technical cooperation among developing countries’ (TCDC) to include various other dimensions of development cooperation. He said that the sub-theme of this seminar was cautiously chosen to be ‘towards a sustainable future’ in view of the future aspirations for the developing countries set out in the Brundtland Commission Report (1987) and Rio+20 outcome documents entitled ‘The Future We Want’. In the context of ‘future sustainability’, he pointed out the lack of capacity of developing countries to effectively use their indigenous resources. Dr. Qureshi informed that this seminar is being held at an auspicious occasion when the leaders from around the world are meeting at UN Headquarters to adopt the post-2015 Development Agenda. Dr. Qureshi noted that the obligations stipulated in the SDGs have more or less been a part and parcel of COMSATS’ programmes owing to the mandate given to the organization in its international agreement signed by the Member States in 1994 as well as the Charter of COMSATS’ Network of Centres of Excellence. He opined that COMSATS is a living example of a long-haul commitment to triangular and South-South cooperation programmes.

In his talk, entitled ‘South-South learning in the context of Sustainable Development’, Mr. 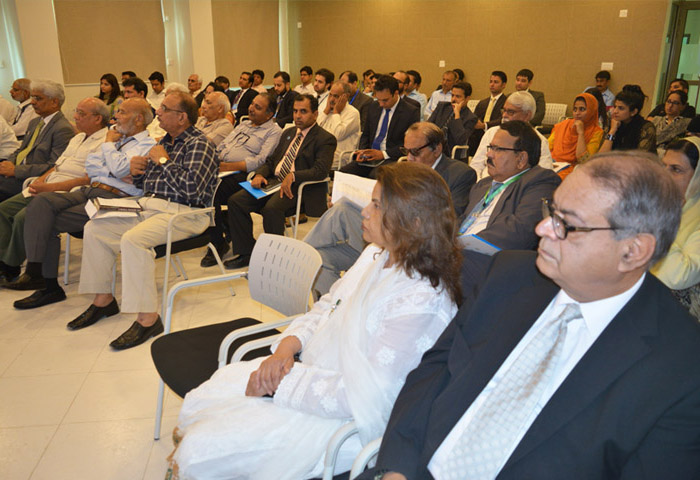 Shakeel Ahmad, Assistant Country Director UNDP, noted that the Global South is gradually becoming a source of ODA to other countries (least developed countries). Referring to UNDP Human Development Report (2013), he said that by 2020, the combined economic output of three leading developing countries namely, Brazil, China, and India, is expected to surpass the aggregate production of Canada, France, Germany, Italy, the United Kingdom and the United States. The emergence of new economic blocs like BRICS further accentuates the rise of the Global South. He noted that South-South Cooperation is becoming more of a necessity than just one of the options for achieving growth and human development in the South. He said that the statistics of developing countries essentially point towards the wealth of knowledge and innovation that the South is accumulating as their economies grow, and also suggest an unequivocal potential and opportunities that the countries of the South and South Asia in particular could explore for achieving SDGs.

The technical session of the seminar comprised of four insightful presentations and talks on different aspects of South-South cooperation.

In his power-point presentation, Prof. Dr. Qamar-uz-Zaman Chaudhry, Special Advisor to the Secretary-General of World Meteorological Organization (WMO), discussed key aspects of climate change in the global development framework. He noted that the emphasis of all the stakeholders at the upcoming annual Conference of Parties to UN Framework Convention on Climate Change (COP21) to be held in Paris this year would be that every nation should contribute towards reducing the GHG emissions. To respond to the climate change, the counties will have to adapt to the new conditions and take measures to mitigate its effect.

The third speaker of the technical session, Dr. Vaqar Ahmed, Deputy Executive Director Sustainable Development Policy Institute (SDPI), Islamabad, highlighted the role being played by SDPI, an independent think tank, in the global efforts for sustainable development. He pointed out some key areas in which SDPI made learning about the solutions to social issues from other countries and tried to adopt them in Pakistan’s context. Among the factors that helped social sector development in Pakistan are: rise of media; rise of independent judiciary; rise of self-funded/self-organized efforts by communities; and empowered youth. He pointed out that the major threats to Pakistan’s development are its shrinking exports in global markets and its declining trade with the neighboring countries. He asserted that there is a need for coordinated extraordinary efforts by the private-sector and the government to come out of the crisis.

The last speaker of the seminar, Dr. Talat Anwar, Advisor, Centre for Policy Studies, CIIT-Islamabad, in his talk touched upon the emerging economic trends in the context of South-South cooperation. He noted that intra-regional trade has expanded to become regional trade. He informed that the countries have liberalized trade through foreign direct investment (FDI) and that middle and low-income countries have received a great inflow of FDI that has played a great role in their development. He noted that the Kingdom of Saudi Arabia has the highest FDI (as percent of GDP), i.e 6.8%, and that Pakistan has not been able to fully benefit from FDI due to its security situation. He was of the view that China needs to direct its savings to other developing countries for a mutual gain, as it would also earn dividends to China in the long run. Dr. Anwar also recounted some challenges to economic cooperation that the developing countries are facing. These included the substantial non-tariff barriers; challenges to alter anti-dumping; as well as perception of sharply unequal benefits to individual countries. 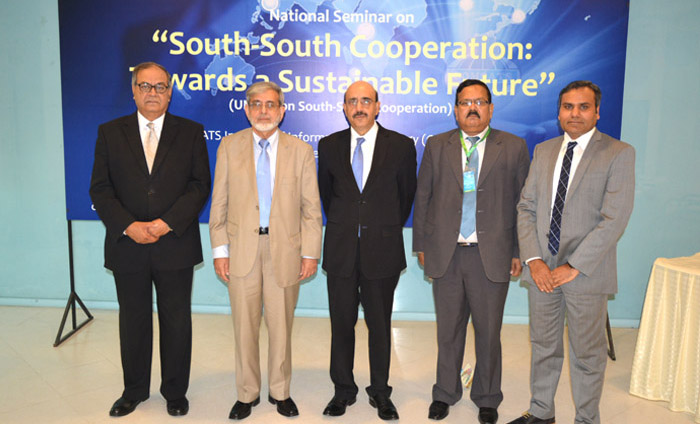 The seminar concluded on the note of optimism towards South-South cooperation as effective means to benefitting the developing countries.