COMSATS marked its 21st Anniversary, October 5, 2015, with the induct 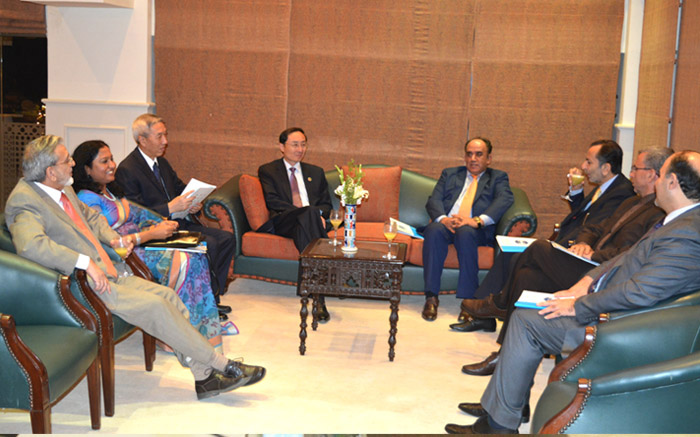 ion of Palestine as COMSATS’ 23rd Member State. A graceful ceremony in this regard was held in Islamabad after an Ambassadorial dinner held for the diplomatic missions of COMSATS Member Countries/States in Islamabad, in connection with COMSATS’ upcoming 3rd Commission Meeting (27-28 October 2015) and 3rd Consultative Committee meeting (26th October 2015) in Accra, Ghana. The representatives of 13 diplomatic missions in Pakistan, belonging to Bangladesh, China, Egypt, Ghana, Iran, Jordan, Kazakhstan, Korea (DPR), Morocco, Nigeria, Sri Lanka, Syria, and Tunisia, witnessed the ceremony. H.E. Mr. Rana Tanveer Hussain (Minister), and Mr. Fazal Abbas Maken (Federal Secretary), represented COMSATS’ Focal Ministry in Pakistan, the Ministry of Science and Technology (MoST). The latter would be chairing the 3rd COMSATS Consultative Committee Meeting to be held in Accra, in his capacity as the ex-officio Chairperson. Also present on the occasion were other senior officials of MoST, the Ministry of Foreign Affairs, COMSATS Secretariat and COMSATS Institute of Information Technology (CIIT), as well as members of local print and electronic media community.

The Ambassador of the State of Palestine to Pakistan, H.E. Mr. Walid Ab 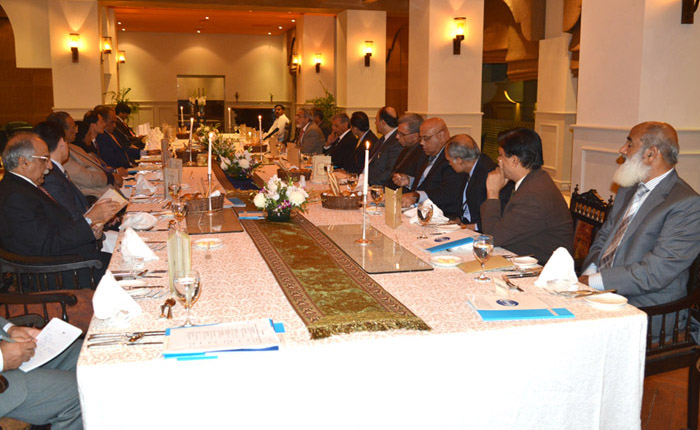 u Ali, and the Executive Director COMSATS, Dr. Imtinan Elahi Qureshi, signed the Accession Agreement on behalf of the Government of Palestine, and COMSATS, respectively. With the signing authorized by the Palestinian Government, the Accession Agreement is effective immediately and does not need further ratification. The agreement also entails appointment of a relevant Ministry of the State of Palestine as COMSATS’ Focal Point, and, in due course, nomination of a suitable Palestinian institution to join COMSATS’ Network of International S&T Centres of Excellence. In this regard, correspondence with the Palestinian Ministry of Higher Education has already been initiated seeking nominations of a higher education institute of Palestine.

Speaking on the occasion, the Minister for Science and Technology hailed the induction of Palestine as Member State of COMSATS coming at the heads of the raising of Palestinian Flag at UN Headquarters. Referring to Dr. Qureshi’s earlier briefing about significance and objectives of the above-mentioned statutory meetings of COMSATS, he said, “I request you to kindly sensitize your capitals about how much importance we attach to these meetings and how much we will appreciate if highest level participation is made by relevant ministries of your countries”. The Minister made it clear that, by hosting COMSATS Secretariat, the responsibilities of Pakistan are increased but it does not bestow special rights to Pakistan. He noted that Government of Pakistan provides running expenses of the Secretariat for the sole purpose of contributing towards the South-South cooperation from the platform of COMSATS.

The Palestinian Ambassador to Pakistan expressed pleasure and satisfacti 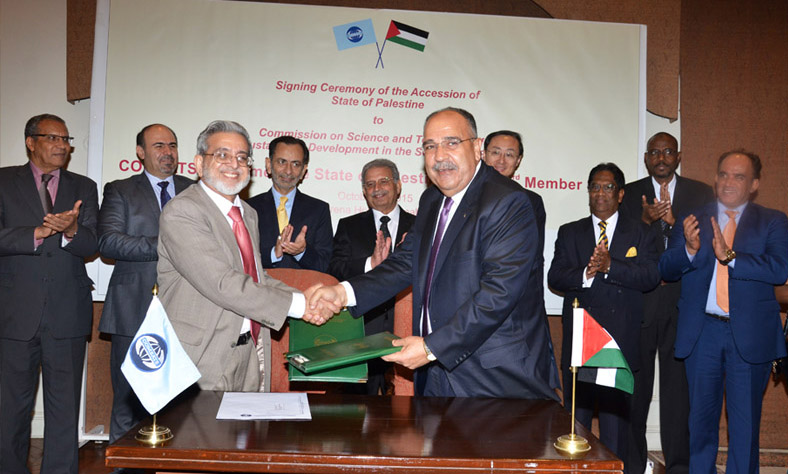 on on his country’s accession to COMSATS. He conveyed Palestine’s determination to actively participate in the programmes and activities of the organization. The Executive Director COMSATS also expressed pleasure on Palestine’s induction as a Member State of COMSATS and appreciated the efforts of Ambassador Abu Ali in this regard.

Apart from its representation in the 3rd meeting of COMSATS’ apex statutory body – the Commission – convened in Accra by the President of Ghana, Palestine can now benefit from the deliberations and multilateral technical exchange at COMSATS’ other international fora, as well as take part in its various programmes. Moreover, Palestinian students can now benefit from the scholarships for COMSATS’ Member States offered by some of COMSATS’ Centres of Excellence. The initiatives of COMSATS now available to Palestine include the International Thematic Research Groups; Distinguished Professorship Scheme; Science, Technology and Innovation Policy consultancy; and capacity-building and knowledge-sharing activities.

On a subsequent visit to COMSATS Headquarters on 13th October 2015, His Excellency thanked the Executive Director COMSATS and his colleagues from the Secretariat for their cooperation before and after the signing of COMSATS’ Accession agreement by the State of Palestine, and strongly hoped that his country would benefit greatly from the membership. With regard to availing scholarships for Palestinian students, he informed that he had already requested the relevant Ministry back home, the Ministry of Higher Education, to nominate deserving and suitable students who could avail the scholarships in different academic programmes at CIIT.

Earlier, during the meeting, the Executive Director COMSATS presented to the Ambassador official documents prepared in connection with COMSATS’ 3rd Commission Meeting to be held in Ghana later this month. At the end of the meeting, the visiting Palestinian Ambassador also presented the Executive Director with a shield in appreciation of the efforts made by COMSATS Secretariat. 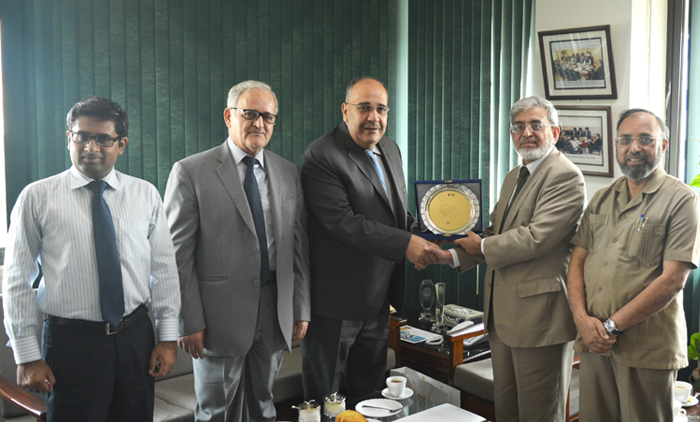