The Third Regional Consultative Workshop on ‘National Innovation System and 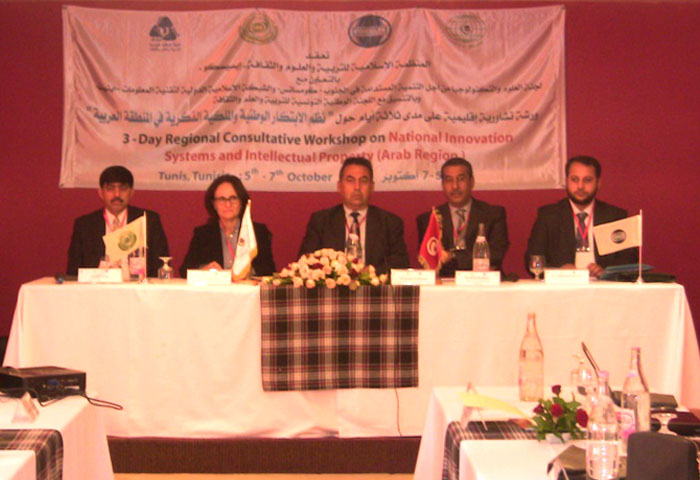 Intellectual Property’ for the Arab Region, was held successfully on October 5-7, 2015, in Tunis, Tunisia. This workshop was hosted by the Tunisian National Commission on Education, Science and Culture (TNCESC). The event was third of the series of workshops organized by the COMSATS in collaboration with the Islamic Educational, Scientific and Cultural Organization (ISESCO) and the Inter-Islamic Network on Information Technology (INIT). The first two of the series for the Asian and African regions were held in Islamabad-Pakistan (2013) and Rabat-Morocco (2014), respectively.

In line with the theme of the series of workshops, this intellectual exchange activity was also meant to benefit middle to high level policy planners, IP practitioners and academicians. The key objectives of the workshop were to deliberate on the contours of National Innovation System (NIS) and IP Regimes in the Arab World; develop capacities of relevant stakeholders from the Member States of COMSATS, ISESCO and INIT; as well as to sensitize them on the need of having strong NIS/IP policies for effectively meeting the challenges of competitiveness in the midst of globalization and rapid technological transformation.

On the occasion, Mr. Essid conveyed the greetings of the Tunisian Minister of Education and the President of TNCESC. He stressed the importance of an efficient and a well thought out National Innovation System and IP regime for any developing country to prosper.

In his address delivered by Mrs. Wafaa El Alami, Head of Planning, Information and Documentation Centre (CPID) of ISESCO, H.E. Dr. Abdulaziz Othman Altwaijri, Director General, ISESCO, expressed his confidence in and fruitful cooperation with COMSATS and INIT, and thanked the host institution. He also touched upon the importance ISESCO attaches to scientific research and technological innovation.

Mr. Riad Ben Boubaker, Director, National Center for Educational Innovation and Research in Education (CNIPRE), representing the Minister for Education, Government of Tunisia, welcomed the participants, and appreciated the holding of a regional workshop on national systems of innovation and intellectual property in Tunisia. He hoped that the workshop will provide policy guidelines to the governments of the region for keeping pace with rapid developments taking place in today’s world.

The Executive Director INIT, Mr. Tahir Naeem underscored the need of efficient NIS/IP regime in the wake of decreasing marginal returns on investments in physical resources. He noted that knowledge and technology have assumed a centre stage for increasing productivity and competitiveness of firms, industries and in turn the (national) economies.

In his message read out on the occasion by Mr. Abdul Majid Qureshi, Research Scholar, the Executive Director COMSATS highlighted the key role the present governments have to play in today’s rapidly changing socio-economic environment. He called for creating enabling environment for innovation by harnessing the creativity of their people and enterprises, developing good management practices particularly in small and medium sized firms, as well as facilitating linkages among different stakeholders. 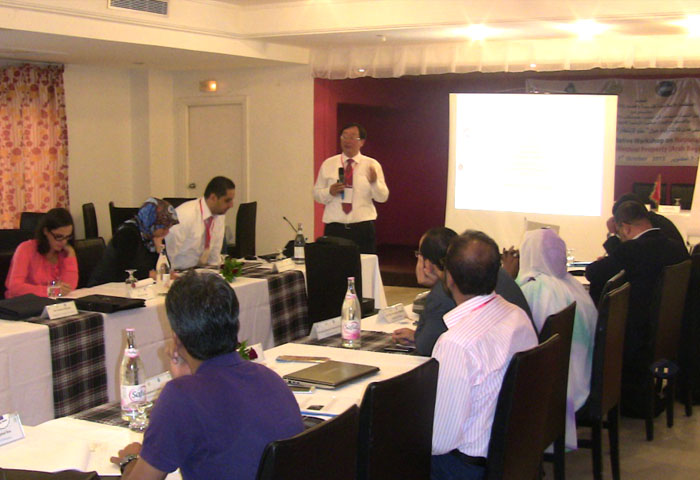 ed of talks and presentations that highlighted the importance of a robust and efficient National Innovation System and its impact on the promotion of a culture of innovation and economy, particularly in the Arab region. It included country/organizational case studies highlighting successfully implemented NIS/IP frameworks/models in the region were presented to underscore the importance of IP towards valorization of innovation and the need to protect ideas and advances in knowledge.

The participants discussed challenges faced by developing countries in implementing effective IP regimes, including problems of drafting and examining patents. Several cases of Arab innovation system and frameworks of intellectual property being promulgated in these countries, and their role in making an economy knowledge-driven were discussed. Key issues relating to patent filing, and a need for greater awareness of IP was stressed and benefits to researchers and small industry were highlighted.

Finally, a round table discussion touched upon various aspects of the themes and res 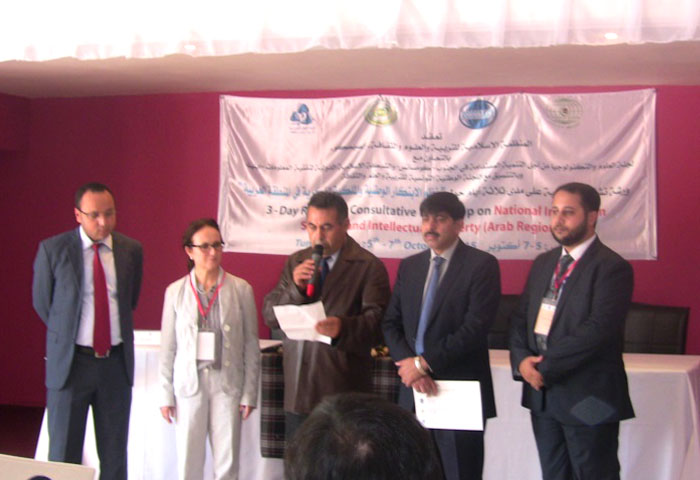 ulted in the key recommendations to the organizers for improving the state of awareness on the subject in the developing world. The recommendations to the organizers called for adopting a “utility model” law to take advantage of scientific research and innovation results; creating a Network of Intellectual Property in the Arab and Islamic countries to share knowledge, experiences and expertise; supporting Arab and Islamic countries on the development of regulations relating to intellectual property in the legislative, technical and human and institutional fields; as well as organizing workshops in the future in cooperation with the intellectual property offices on writing and documenting the patents.

A city tour to the historic site of The Carthage National Museum and to the touristic destination of Sidi Bou Said was organized at the close of the second day of the Workshop. The tour underscored the historical significance of Tunisia as one of the oldest civilisations linking the rest of the world with Africa and the significance of knowledge economy and incremental innovations even during the Carthage civilization. The participants were then taken to the Ez-Zitouna Mosque which is known to host Islam’s first and oldest degree awarding university.

A resolution draft proposed by Mr. Tahir Naeem, urging the need to continue dialogue on a sustained basis and affirming the resolve to promoting the subject areas of the workshop, was adopted unanimously by the participants/organizers of the workshop.

The concluding ceremony of the workshop took place on October 7, 2015, which was also presided over by the Assistant Secretary General, TNCESC, Mr. Mohamed Kamel Essid. He lauded the organizers for sensitizing the stakeholder governments on key issue of NIS/IP for their socio-economic development. Mrs. Wafa El Alami, presented vote of thanks on behalf of the organizers and said that the proceedings of the workshop were indeed useful in understanding the regional imperatives for innovation and the challenges faced thereof. M. Nour-Eddine Boukharouaa, Chairman of the last technical session presented the vote of thanks on behalf of the participants of the workshop.

Mr. Tahir Naeem in his concluding remarks thanked the host institution for facilitating the round of discussions and stressed the need for addressing the challenges of National Innovation System and Intellectual Property through awareness and assertive action. The representative of COMSATS, Mr. Abdul Majid Qureshi, encouraged the participants to give their feedback to improve the outcomes of the future events of this activity. The participants of the workshop were awarded certificates of participation.