The Regional Workshop on Biosafety and Biosecurity in Life Sciences Research, Islamabad, was inaugurated by the Federal Secretary, Ministry of Climate Change, Government of Pakistan, Mr. Syed Abu Ahmad Akif, on April 26, 2016, at the premises of Pakistan Academy of Sciences (PAS). The event is being jointly organized by COMSATS, ISESCO, and PAS. The inaugural ceremony was attended by over 170 participants that included academicians, students, science administrators and media personnel.

Speaking on the occasion, the Secretary General PAS, Dr. Zabta Khan Shinwari, introduced the Academy as a supreme body of Pakistan promoting science in the country. He shared the importance of the dates of the event in relation to the DNA Day (25th April) that commemorates the completion of the Human Genome Project in April 2003, and the discovery of DNA’s double helix in 1953. He highlighted the emerging technologies in life sciences, such as genetically modified organisms (GMOs), and more recently human gene editing. In view of the rapid advancements in the latter, he shared the possibility of soon developing a human devoid of any human gene template. In view of such radical trends, he called for strong ethical guidelines to check and monitor research work in life sciences to safeguard the moral fabric of the society.

The ISESCO Representative based in UAE, Dr. AbdulAzeez Hameed Ali, conveyed the greetings of Director General ISESCO, Dr. Abdulaziz Othman Altwaijri, and thanked COMSATS and PAS for collaborating with ISESCO for co-organizing this workshop on a crucial theme of current interest, and appreciated their achievements over the years. Dr. Ali thankfully acknowledged the hospitality of the Pakistani Government and institutions provided to foreign participants and speakers of the event. Highlighting the key objectives of ISESCO, he noted that the organization’s efforts spanning over thirty years for promotion of Science by holding workshops and seminars within and outside the Islamic World. He considered the event an opportunity to sensitize the relevant quarters for taking necessary measures and launch campaigns on relevant emerging issues.

In his address, the Executive Director COMSATS, Dr. I.E. Qureshi, took stock of the rapid developments in life sciences research and highlighted the theme of the event and relevant issues in the developed and the developing world. He noted with satisfaction that many relevant individuals and organizations were participating in the event and recalled the efforts made by the organizers to invite representatives from government officials, R&D organizations and universities. He was pleased to note the participation of the life sciences students as he deemed them the custodians of morals and traditions in the future research, and hoped that they would be able to sensitize their circles about lab safety, biosafety, and biosecurity. He appreciated ISESCO and PAS for their collaboration and highlighted their mandates and their relevance to COMSATS. He recalled his recent meeting with the Director General ISESCO in Morocco, when the latter had termed COMSATS as “the most trusted partner”. He stated that this partnership works towards tangible gains for common Member States and recounted some important themes in which both the organizations have held joint activities in the recent years. These included serial/thematic events on: ICTs for Agriculture, Health and Education; National Innovation Systems; and Internet Security. Dr. Qureshi made a special mention of the upcoming 8th Review Conference of Biological Weapons Convention (BWC) that addresses weapons of mass destruction based on biological and toxin agents. He noted with concern some missing aspects in BWC, including the lack of universality especially with respect to the Middle East, and verification regime. On a related note, he recalled his participation in the 6th BWC, where developed and developing countries seemed at odds on some important issues, such as those concerning the Article X related to cooperation for biotechnology research for peaceful purpose. Referring to some trends and technologies in life sciences, such as CRISPR being used to tailor the human genetic code, he considered it important to have relevant legal obligations for scientists and research organizations working in sensitive areas of life sciences. Thanking the Federal Secretary, who also chairs Pakistan’s National Biosafety Committee, for presiding over the inaugural ceremony, he hoped that Pakistan’s Ministry of Climate Change would benefit from the technical findings and deliberations of the workshop.

Mr. Akif delivered the inaugural address on behalf of the Federal Minister. He highlighte 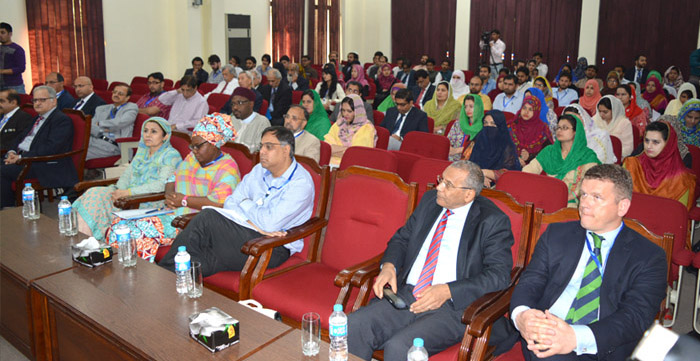 d the threat and opportunities in the life sciences research and informed that a handful of global corporations, research institutions, and governments could soon hold patents on the all human genes cells, organs, and tissues, as well as on most of the known species of micro-organisms, plants, crops and animals, acquiring monopoly over major resources of the world. Referring to some positive trends, he noted the potential of tissue-culture in giant bacteria baths to obtain increasing volumes of food and fiber grown indoors, helping to achieve optimization of time, space and money. He called for efforts to develop a National Biosecurity Plan to address concerns regarding Pakistan’s preparedness for bio-threats in various sectors including environment, agriculture, and health. He pledged his Ministry’s support for any initiative in this regard. As the Chairperson of National Biosafety Committee of Pakistan, he appreciated the theme of the event and congratulated the participating speakers and experts for recognizing its importance. He congratulated COMSATS, ISESCO and PAS for co-organizing this workshop on a scientific theme which he deemed an important policy area.

The technical deliberations of the three-day workshop are spread over seven sessions covering issues, research and findings related to: Biosafety and lab safe handling; Biosecurity; and Bioethics. The event has participation from over 40 government institutions, R&D organizations, and universities from 20 cities of Pakistan, as well as speakers from Kazakhstan, Jordan, Bahrain, Iran, USA, and Nigeria. The event is also featuring poster presentations based on research related to the theme of the workshop.