19th Meeting of COMSATS Coordinating Council Takes off in Islamabad

The meeting of COMSATS’ most important statutory body, the Coordinating Council started in Islamabad today after elaborate preparations and coordination with COMSATS’ Network of Centres of Excellence. 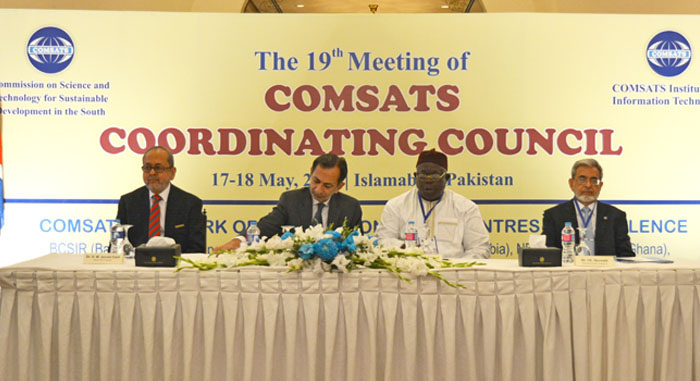 The meeting was inaugurated in a graceful ceremony presided over by Mr. Fazal Abbas Maken, Federal Secretary, Ministry of Science and Technology, who is also the ex-officio Chairperson of the organization’s Consultative Committee. Mr. Maken was representing the Pakistan’s focal Ministry of the country that hosts the Secretariat and the national patron of the host of the event, COMSATS Institute of Information Technology (CIIT). CIIT is one of the COMSATS’ flagship projects, as well as an active member of COMSATS Coordinating Council. Out of the present 20 Centres of Excellence, 14 Centres are being represented in this year’s Council meeting from China, Egypt, Ghana, Jordan, Kazakhstan, Nigeria, Pakistan, Sri L 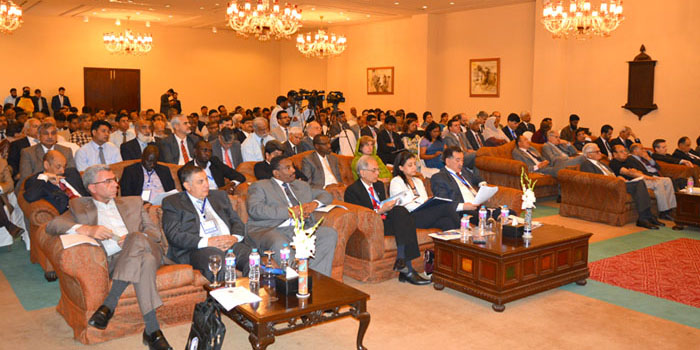 During his inaugural address, Mr. Maken opined that expectations of a vast majority of populations in developing countries are very modest, such as food water, health, sanitation, education housing, transportation and affordable sources of energy, and scientists as well as every resourceful member of the society need to help achieve equitable resources for all. He considered the role of organizations, such as COMSATS’ important in this regard. He expressed confidence in the international operations of COMSATS and lauded its services in the domain of science and technology to Pakistan and other Member States. He hoped that this international platform would effectively be used for finding scientific solutions to developing countries’ problems and lead them to economic prosperity. He further noted that the Government of Pakistan is committed to supporting the Commission on Science and Technology for Sustainable Development in the South (COMSATS) in view of the critical role it is playing for S&T capacity-building to relieve the developing countries from the bonds of poverty and underdevelopment

Speaking at the occasion, Dr. I. E. Qureshi, Executive Director COMSATS, stated that COMSATS’ activities are built around COMSATS’ core mission of providing assistance for socio-economic development in the countries of the global South. Dr. Qurshi highlighted the pivotal position the Council holds in coordinating international programmes with other statutory bodies of the organization. He noted that with 20 nodes having over 15,000 working scientists, the Council plays a major role in initiating and steering the programmes of COMSATS.He noted that the Council represented by renowned scholars, with wide experience and strong influence, well-recognized at national level in their countries, provides an opportunity for real-time scientist-to-scientist interactivity that renders invaluable opportunities of cooperation, exchange of ideas, and sharing of human and material resources. He expressed faith in the scientific leaders of Member States attending the Council meeting for coming up with an effective agenda to energize their respective governments to improve standards of their R&D institutes and to facilitate South-South Cooperation. He noted with pleasure the participation of 14 Centres during the current meeting.

In his message, Dr. Eduardo Posada, Chairperson Coordinating Council, noted that dependence on developed countries for aid and intellectual support helps but is not sustainable and comes at a cost of national integrity and security. He emphasized the need for directing efforts to strengthen COMSATS, an organization of the developing countries, in order to improve its visibility and influence the decision-makers for the promotion of S&T for socio-economic development of the South.

As the host of this year’s Council Meeting, Dr. S.M. Junaid Zaidi, Rector CIIT, welcomed the Council members and hoped that the meeting would serve as a catalyst for strengthening the South-South cooperation on knowledge exchange and creation of new knowledge. He noted with pleasure that his Institute carrying the acronym ‘COMSATS’ has realized fast-paced growth since its establishment in 1998 and vows to breaking into a new era of growth and success with a vision to be among the best seats of higher learning, within the COMSATS Network in particular and the world in general. 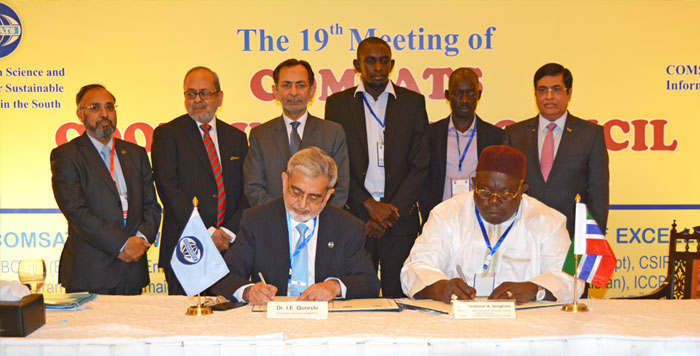 A Major highlight of the inauguration was the ceremony of signing of COMSATS’ accession agreement by H.E. Prof. Dr. Aboubacar Senghore, Minister for Higher Education, Research, Science and Technology, Islamic Republic of The Gambia, and Dr. I.E. Qureshi, Executive Director COMSATS. By virtue of signing this agreement, The Gambia has become the 24th Member State of COMSATS. While addressing the gathering, the honourable Minister noted that Government of the Islamic Republic of Gambia is making all out efforts in building relevant infrastructure in the country for the promotion of science and technology. He informed the audience that his government has taken several initiatives for national S&T policy and has established a polytechnic institution. Prof. Dr. Senghore informed that the President of Gambia recently declared the country to be an Islamic Republic, distancing the country from its colonial past. In this regard, he sought international community’s support for the national development of Gambia. He particularly sought COMSATS’ support in the area of higher education. At the occasion, Rector CIIT pledged his institutions’ support to the new Member State of the COMSATS by offering scholarships to the Gambian students as well as expertise for developing the country’s human resources and academic institutions.

The Council is going to deliberate on a 12-point agenda during its Islamabad meeting, and is expected to elect a new chairperson, deliberate on the existing and new programmes, review activities of Centres of Excellence, as well as discuss financial and administrative matters of the organization.