COMSATS organized a Seminar on September 22, 2016, to commemorate the UN Day for South-South Cooperation, in Islamabad. The event was held in collaboration with Pakistan Academy of Sciences, at the latter’s premises on the theme of ‘Framework of Sustainable Development Goals (SDGs)’. Mr. Neil Buhne, UN Resident Coordinator and UNDP Resident Representative in Pakistan, was the Chief Guest at the event that was attended by over 90 participants including academicians, scientists, economists, entrepreneurs, sustainable development policy makers & practitioners, media and civil society; representatives of government, international development agencies, NGOs and education institutions.

In addition to the address of the Chief Guest and the opening remarks from the organizers, the event featured two keynote addresses, two technical talks, and a panel discussion session.

In his inaugural address, Mr. Buhne noted that dynamics of the world and cooperation patterns over the years are changing very fast, however, South-South Cooperation is still relevant in many ways. He said the development paradoxes in Pakistan are not much different from those in the developed countries. Despite a number of shortcomings, Pakistan is one of the earliest adopters of the SDGs at the parliament level, he added. The UN Resident Coordinator also laid emphasis on the importance of development indicators for assessing the progress made.

On behalf of the event organizers, Dr. Anwar Nasim, President of PAS, and Mr. Irfan Hayee, Deputy Director (Programmes) COMSATS, gave their opening remarks. Dr. Nasim strongly advocated the role of science academies in promoting S&T for sustainable development. In special connection to COMSATS, he recalled and recognized the services of Prof. Abdus Salam, who made invaluable contributions to the development of science and relevant institution building in developing countries. He hoped that the science complexes created for promotion of S&T would live up to their mandate and potential. Mr. Hayee noted that COMSATS’ programmes are consistent with the concepts of South-South cooperation and Sustainable Development Goals. He considered COMSATS’ Network of Centres of Excellence an important force in the organization of South-South Cooperation activities.

The keynote presented by Prof. Dr. Zabta K. Shinwari, Secretary General of PAS, entitled ‘From MDGs To SDGs & South-South Cooperation Needed for its Success’, highlighted the crucial relationship between science, society, and policy making. He highlighted the number of socio-economic challenges that need to be taken into account for making science and technology beneficial for the society. He believed that there could be no development without scientific intervention and solutions. He said most SDGs are interlinked, achieving one goal could have unintended consequences on others if pursued separately. Prof. Shinwari concluded his presentation by stressing the need for having concrete policies for South-South cooperation in efforts to overcome shared challenges and accelerate the progress towards sustainable development goals.

The second keynote address was given by Prof. Dr. Anwar-ul-Hassan Gilani, Chairman, Pakistan Council for Science and Technology (PCST), who was also representing the Ministry of Science and Technology, Government of Pakistan. In his address entitled ‘Role of STI to the Three Dimensions/Pillars of Sustainable Development’, he pointed out the interdependence of various SDGs. He believed there is an over emphasis on one of the pillars of Sustainable Development, the Economy, without due consideration to the other two, i.e., society and environment. He considered political will and human resource development as the key factors that can drive sustainable development efforts. For successful achievement of SDGs, Dr. Gilani highlighted the need for country-specific need assessment and rationalizing the goals accordingly, as global agendas cannot be adopted as such for each nation. He considered the role of media very crucial in spreading awareness and highlighting the importance of scientific interventions for development.

Dr. Abid Qaiyum Suleri, Executive Director Sustainable Development Policy Institute (SDPI) and Mr. Syed Tanvir Abbas Jafri, Incharge China Study Center, COMSATS Institute of Information Technology (CIIT) gave the technical talks on the occasion. Dr. Suleri shared people’s skepticism about the achievement of the Goals. He considered the SDG 16, ‘Peace, Justice and Strong Institutions’ the most important for an overall socio-economic development. He noted that although per capita incomes seem to be increasing, the disparity in incomes and inequality is still on the rise. He called for rationalizing expectations from the SDGs and modifying approaches for achievement of these Goals, especially in the light of the world’s experience with the MDGs.

Mr. Jafri’s talk, entitled ‘China: Exporting Sustainable Development’, dealt with the ‘One Belt one Door (OBOR)’ project of China, as a case study of South-South Cooperation. He informed that with trade as its major focus, China’s OBOR involves cooperation agreements with 65 countries and benefits many more. He discussed a number of related aspects of the programme, including financial, political, social and cultural. It was noted that a number of free trade agreements have been signed with stake-holding countries. He believed that despite the vast benefits this project may accrue for the countries involved, they need to remain sensitive towards their human resource and innovation needs.

At the conclusion, shields from the host institutions were given to the distinguished speakers. 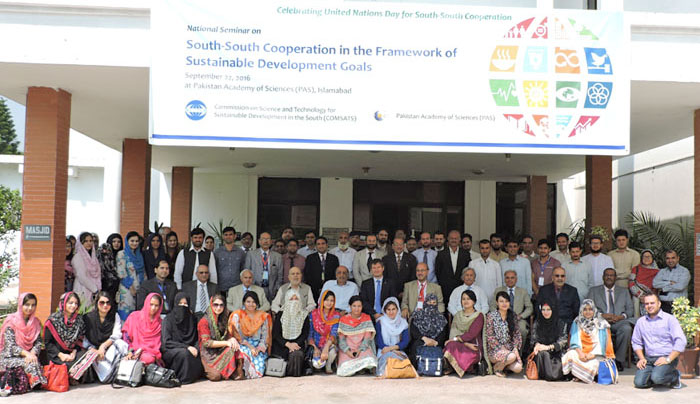