COMSATS held the 14th meeting of its Coordinating Council in Bogotá, Colombia, on 26th and 27th May 2011. The meeting was hosted by the International Centre for Physics (CIF), the Centre of Excellence of COMSATS in Colombia. The meeting was attended by Heads of 8 Centres of Excellence of COMSATS, from Brazil, China, Colombia, Egypt, Nigeria, Pakistan, Sudan, and Turkey. The meeting was chaired by Dr. Eduardo Posada F., Director CIF, who was elected the Chairperson during the last meeting of the Council, held in Trieste, Italy.

The two-day international meeting was inaugurated by D 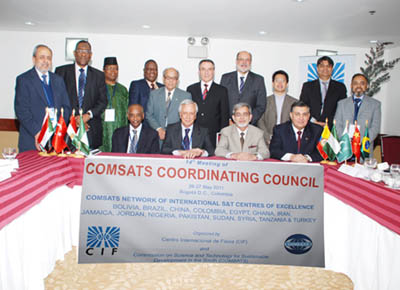 r. J. Restrepo, Director Colombian Administrative Department of Science, Technology and Innovation (COLCIENCIAS) on May 26, 2011. In his Inaugural Address, Dr. Restrepo stated that Colombia found itself at a crossroads in terms of S&T in the wake of the new Law of Science, Technology and Innovation passed in 2009, which has provided a framework for integrating S&T sector to make it more productive. He stated that the objectives of COMSATS coincide with the Colombian aim of using S&T for the sustainable utilization of its rich biodiversity, energy and natural resources for the benefit of the people of Colombia. Shedding light on the new approach of Colombia towards S&T, Dr. Posada emphasized the need of developing capable S&T manpower, strengthening scientific institutions and increasing national expenditure on S&T by the developing countries. The Executive Director COMSATS, Dr. Imtinan Elahi Qureshi, who is also the Ex-officio Secretary to the Council, elucidated the role of COMSATS as an effective forum for South-South cooperation. Dr. M.H.A Hassan, Former Executive Director TWAS, also attended the meeting as an honorary life-time member of the Council.

The Council that met for the first time in a Latin American country deliberated on an 11-point agenda that covered important matters relating to: programmes and projects of COMSATS; finalization of the 1st part of COMSATS’ future Strategy Document; and the nomination of Bangladesh Council of Scientific and Industrial Research (BCSIR) as a new member of COMSATS’ Network of International S&T Centres of Excellence. Besides the presentations by the participating Heads of Centres of Excellence on the S&T activities of their respective Centres, exclusive presentations were made by the Lead Centres of COMSATS’ Thematic Research Groups elucidating the collaborative group research activity undertaken by the members of their respective Groups. In this regard, the representatives of ICCES-China and CIIT-Pakistan made presentations.

A 12-point communiqué issued at the end of the meeting, inter alia, underscored the need for: having more projects launched in the thematic areas that were agreed in the previous Coordinating Council meetings; capacity-building by means of training, technical exchange, workshops, higher education, dissemination of knowledge and linkages with donor agencies; undertaking necessary work in order to achieve the objective of holding the 2nd Commission meeting of COMSATS (possibly in 2012); and annual allocation of at least 2% of GDP by the Member States for their S&T sectors.

The Council showed satisfaction over the administrative and financial matters of COMSATS Secretariat and approved its budget for 2011-12. The 15th meeting of the Coordinating Council will be held in Istanbul, Turkey, and will be hosted by COMSATS’ Centre of Excellence, the TÜBİTAK Marmara Research Centre.