CIIT Holds its 15th Meeting of Board of Governors

Home   /   CIIT Holds its 15th Meeting of Board of Governors

Dr. Qureshi expressed deep satisfaction over the proposals on “Strengthening the International Character of CIIT”. He mentioned that the relationship between COMSATS and CIIT should be further strengthened and efforts should be made by CIIT to flourish under the ambit of COMSATS. Also, he appreciated the Rector CIIT for extending scholarships to the students from COMSATS’ member countries for post-graduate studies. The participants were informed about the efforts being made by COMSATS Secretariat for the 2nd Commission Meeting in Pakistan, which has been scheduled for April 2010.

The Federal Secretary MoST applauded the efforts of CIIT and assured full cooperation on behalf of the Government of Pakistan at every level for the smooth progress of the Institute. He suggested that CIIT should make efforts to highlight its activities in the Government circles. In this regard, he suggested that CIIT may make a detailed presentation to the Prime Minister of Pakistan.

It was decided that a special meeting of the Board under the chairmanship of Chancellor, Dr. Muhammad Azam Khan Swati (Minister for Science and Technology) shall be convened with one point agenda to seek its approval on CIIT’s future plans as reflected in the agenda item number three of this meeting: Project, Programmes and Future Plans.

The meeting also resulted in many decisions regarding the organizational structure of the Institute, as well as its future projects and plans like tapping more funds for its R&D activities through various donor organizations and exploring more avenues for international cooperation. 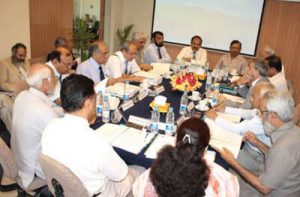