The COMSATS Institute of Information Technology (CIIT) held a special meeting of the Board of Governors under the chairmanship of Executive Director COMSATS, Dr. Imtinan Elahi Qureshi on 29th October 2009. The detailed discussion in the Board meeting was focused on one-point agenda; namely, the approval of a dual degree programme between CIIT and Un 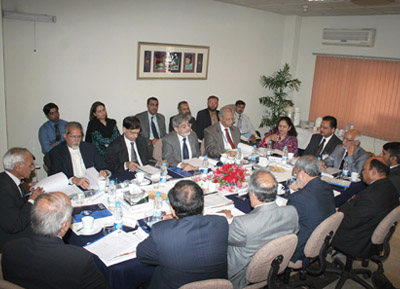 iversity of Lancaster, UK. Rector CIIT noted that the two Universities have been undertaking consultations for the last couple of years, to arrive at an agreement in this respect. According to the planned programme, the Lancaster University (LU) and CIIT will award simultaneously two degrees to such students, who successfully complete a four-year study programme in the Lahore Campus of CIIT in the disciplines of Business Administration, Computer Science and Electrical Engineering (Telecommunication). Considering the very high educational standards of University of Lancaster (10th ranking out of 113 universities in UK) and CIIT (7th ranking out of 124 universities within Pakistan), it has been ensured that the quality of teaching and evaluation process for the students to qualify for dual degree will be of high international standard. The Board of Governors authorized the University administration to proceed with the validation process and establishment of necessary infrastructure, before formally launching the programme. The dual degree scheme has already been approved by the Senate of the Lancaster University in its meeting held on 7th October 2009. The Chairman BoG, hoped that apart from Pakistani students, the programme may be of interest to other members of COMSATS, considering that the cost of this high quality degree will be considerably less as compared to education in UK.