A Delegation of The Gambia Visits COMSATS Secretariat

Home   /   A Delegation of The Gambia Visits COMSATS Secretariat

A delegation from Gambia visited COMSATS Secretariat in Islamabad on 14th September 2017 to explore and enhance scientific collaborations between the Gambia, and COMSATS Member states and COEs. 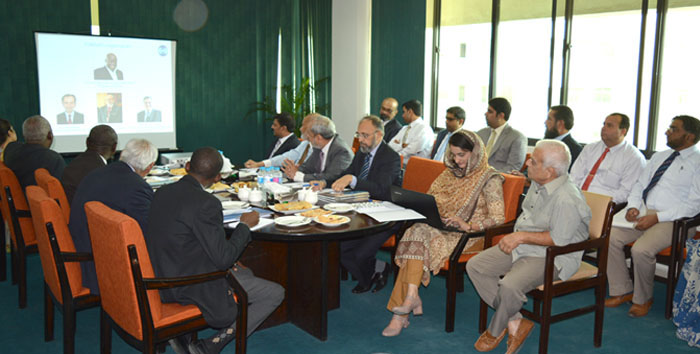 Thanking the delegates for their visit to the Secretariat, the Executive Director COMSATS, Dr. S. M. Junaid Zaidi, appreciated the active role that the Gambia is playing in the organization’s activities. He briefed the delegates about the organization’s strength with respect to Member Countries and Centres of Excellence, as well as its various present and past projects benefitting the Member States. He encouraged the Gambia, relatively newer Member State, to benefit from COMSATS’ programmes to the fullest through participation and Annual Membership Contributions. Also, he pointed of The Gambia’s absence from COMSATS Network of Centres of Excellence that is in process and hoped to be completed in due course of time after approval of the Coordinating Council in its 2018 Meeting.

Underscoring the importance and role of COMSATS’ statutory bodies, Dr. Zaidi encouraged the Gambian Officials to benefit from technical advice from the members of COMSATS Technical Advisory Committee comprising of experts from the North and the South. He also hoped that the Gambia and other member states of COMSATS would be benefiting from COMSATS experience of educational institution building manifested through COMSATS Institute of Information Technology (CIIT) in Pakistan.

The Vice Chancellor UTG appreciated the efforts and support of COMSATS since Gambia joined the organization. Mentioning the University of the Gambia, he stated that it is one of the youngest universities and the only governmental university in the Gambia. The University offers undergraduate programmes in 42 subjects, but Masters and PhD programmes in different fields could not be offered due to lack of faculty as well as facilities. He found the recent efforts of CIIT for awarding scholarships to faculty members in this regard commendable. Appreciating COMSATS for co-organizing the forthcoming International Conference on Vaccines and Viruses in Gambia, he extended the Secretariat officials to visit his country for attending the same. He also mentioned that the Gambian students which have been selected under COMSATS Scholarship programme at CIIT will join COMSATS soon for Masters and PhD studies.

Appreciating the contributions of Dr. Zaidi to bring change in the field of Science and Te 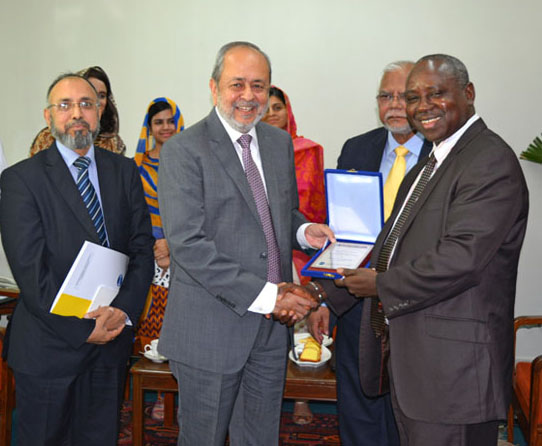 chnology in Pakistan, the Vice Chancellor suggested that the platform of COMSATS can be used for improvement of education and human resource development in the Gambia through capacity building and scholarships. Dr. Zaidi noted that other Centres of Excellence of COMSATS are also offering scholarships to students and researchers from Member States of COMSATS, and efforts can be made to facilitate more students from Gambia in this connection.

The Permanent Secretary thanked the Executive Director for invitation to COMSATS Secretariat. He noted that the Gambia has been in a cooperative relationship with Pakistan for many years. Both the countries should strive to take this relationship to even higher levels. Regarding the development of Centres of Excellence in the Gambia, His Excellency suggested that support from COMSATS would be needed in this perspective. The Permanent Secretary also mentioned that in the last 22 years, the conditions in the Gambia have changed and are now more conducive for initiatives related to Science, Technology, and Innovation.

Prof. Nayan was of the opinion that the matter of establishing new Centres in The Gambia may be taken up with the higher authorities of the country, for which UTG and COMSATS may make joint efforts.

Speaking on the occasion, Ambassador (R) Fauzia Nasreen further noted that the COMSATS’ platform can be used to improve the state of Science and Technology in the Gambia. COMSATS can play a very important role for increasing the capacity of universities of the South.