Dr. John Kirkland formerly associated to the Association of Commonwealth Universities (ACU), UK, is on a four-day visit to COMSATS Secretariat in Islamabad. Decorated with the Order of British Empire, Dr. Kirkland has an experience of over 30 years in higher education management both in the context of developing and developed countries, and provides consultancy to universities, international organizations and funding agencies. At the ACU, UK, Dr. Kirkland has been overseeing programmes related to a number of universities including those from the 26 Member States of COMSATS. The expert was received at COMSATS Secretariat, Islamabad, by the Executive Director COMSATS, Dr. S. M. Junaid Zaidi, and other COMSATS’ officials on December 11, 2017.

Speaking to COMSATS’ officials, he appreciated the range of developing countries that are members to COMSATS and also the newest member, Somalia. Dr. Kirkland referred to his recent visit to Royal Scientific Society, London, with Dr. Zaidi and noted that the authorities there had been impressed with the exciting combination of COMSATS’ member states. He considered it important to have the organization’s mandate, role, and contributions more widely known for a better and wider impact.

Dr. Kirkland noted the trends globally in the development sector, education sector, donor agencies, as well as national policies. Commenting on the impact assessment of scholarships, Dr. Kirkland believed that there is a need to redefine the criteria of assessing the effectiveness and efficacy of scholarships for the home country and open-minded views should be adopted that are concerned more with the betterment of the countries regardless of where the scholars work. Taking note of the scholarships offered from the platform of COMSATS by its Centres in different countries, Dr. Kirkland believed that they should be better marketed among the beneficiary countries for a greater impact.

Dr. Kirkland took keen interest in what he called ‘the period of change’ that COMSATS is going through and showed his willingness to help in the expansion of the organization. Appreciating the existing contributions of COMSATS, Dr. Kirkland especially mentioned COMSATS Institute of Information Technology (CIIT) and considered it well-connected with the institutions in the North.

Dr. Zaidi addressed a number of queries made by Dr. Kirkland including those regarding COMSATS’ membership. He emphasized on the need to enhance the international character of organization. In response to Dr. John’s query regarding IGOs similar to COMSATS in mandate and operations, Dr. Zaidi mentioned the intersecting points with South Centre, Geneva; TWAS, Italy; ICGEB, Italy; and UNOSSC. Dr. Zaidi also informed Dr. Kirkland about the forthcoming meeting of COMSATS Consultative Committee expected to be held in Turkey. Further, he informed him about his upcoming visit to China and mentioned that he aspires to bring Chinese experts working in various fields to work on secondment at COMSATS. He also mentioned his desire to establish a Centre for Climate Studies in Pakistan or China.

During the interactions meeting, Dr. Kirkland also answered a number of questions from COMSATS’ officials, inter alia, pertaining to international cooperation, best practices in the North, and academia-industry divide and relevant national policies.

Later during the meeting, a delegation of British Council comprising of Mr. John McGovern, Consultant at British Council, UK, Ms. Liz Dempsey, Advisor at British Council, Manchester and Mr. Hamza Salim, Project Manager at British Council Pakistan, joined the meeting. The purpose of their visit was primarily to interview Dr. Zaidi for the Going Global initiative of the British Council in view of his vast experience and contributions towards the higher education sector in Pakistan a living example of which is COMSATS Institute of Information Technology. The delegates appreciated COMSATS’ contributions and emphasized the importance of duly utilizing connections in the host country and abroad, as well as the opportunities that arise globally.

During a brief interaction with COMSATS’ officials before the interview, Mr. McGovern noted that CIIT has performed phenomenally during its relatively short span of existence. In his opinion, the institution’s growth has been even faster than that of many institutions established around the same time in the countries of the North. He appreciated the quality of education and facilities provided by the institute at all its campuses and looked forward to his upcoming visit to CIIT Lahore campus along with his colleague, Ms. Dempsey. Referring to his earlier meeting with Dr. Zaidi in the UK, he believed that a number of ideas are possible for execution and may be strongly pursued to be materialized.

Ms. Dempsey highlighted the possible areas of cooperation between the institutions from the North and the South, which included mobility of students. She advised to have stronger networking and having effective communication to have the message of the mandate of the organization across to all stakeholders.

The interactions continued during a formal dinner following the meeting. 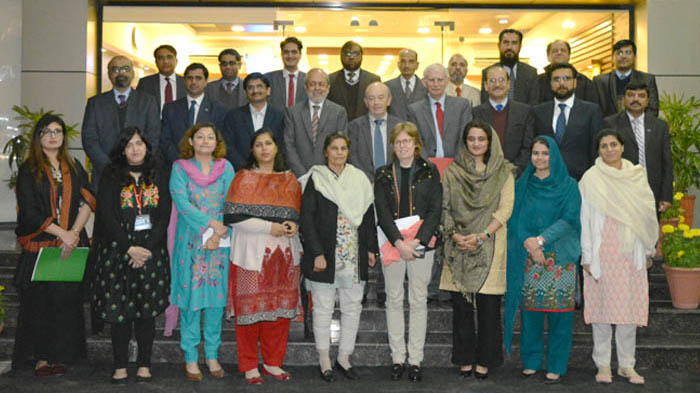