A meeting was held with the Executive Director COMSATS, Dr. S.M. Junaid Zaidi, in the presence of COMSATS’ officials. Dr. John Kirkland, former Deputy Secretary-General at Association of Commonwealth Universities (ACU) who was on his 4-day visit to COMSATS Secretariat also joined the meeting. The purpose of the meeting was to strengthen the ongoing collaboration between COMSATS and Turkey and to explore possibilities of new ones.

Before his briefing, Dr. Zaidi admired the continued support extended by TÜBİTAK MAM since the genesis of COMSATS. During the briefing session about COMSATS, the delegation took keen interest in COMSATS’ tele-health programme and was also inquisitive about COMSATS’ International Thematic Research Groups (ITRGs). Prof. Dr. Ergin expressed willingness to provide support for the launching of tele-health programme in other Member States of COMSATS.

Dr. Zaidi sought help regarding the establishment of new and up-gradation of existing Centres of Excellence, as well as instituting a top-notch university in COMSATS’ Member States. Further, he solicited support for dispatching officials of TUBITAK at COMSATS on secondment as well as experts to provide consultancy and advice for the execution of projects in COMSATS Member States.

Prof. Dr. Ergin gave an overview of various arms of TUBITAK, which are conducting research in areas of wide spectrum from ICTs and chemical sciences to space technology and defense and ammunition. He apprised that TUBITAK is the leading funding agency in Turkey that also deals with publishing scientific literature for public awareness.

Prof. Ahmet assured possible support for facilitation of networking between COMSATS and General Manager of TUBITAK’s Technology Park. He further offered support in the form of technology transfer from TUBITAK to COMSATS’ Network. He also expressed willingness to accommodate researchers belonging to other Centres of Excellence at TUBITAK MAM for trainings/research. Dr. Hasekioglu informed that three (03) scientists from ICCBS, Pakistan will be soon joining TUBITAK-MAM for research.

The meeting ended on a note for stronger collaboration. 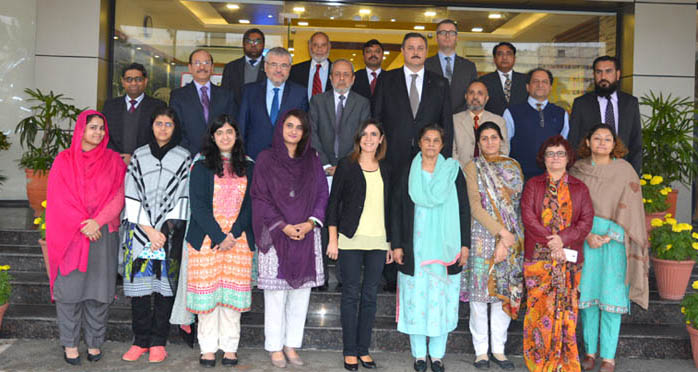