A two-member delegation of COMSATS comprising of Mr. Tajammul Huss 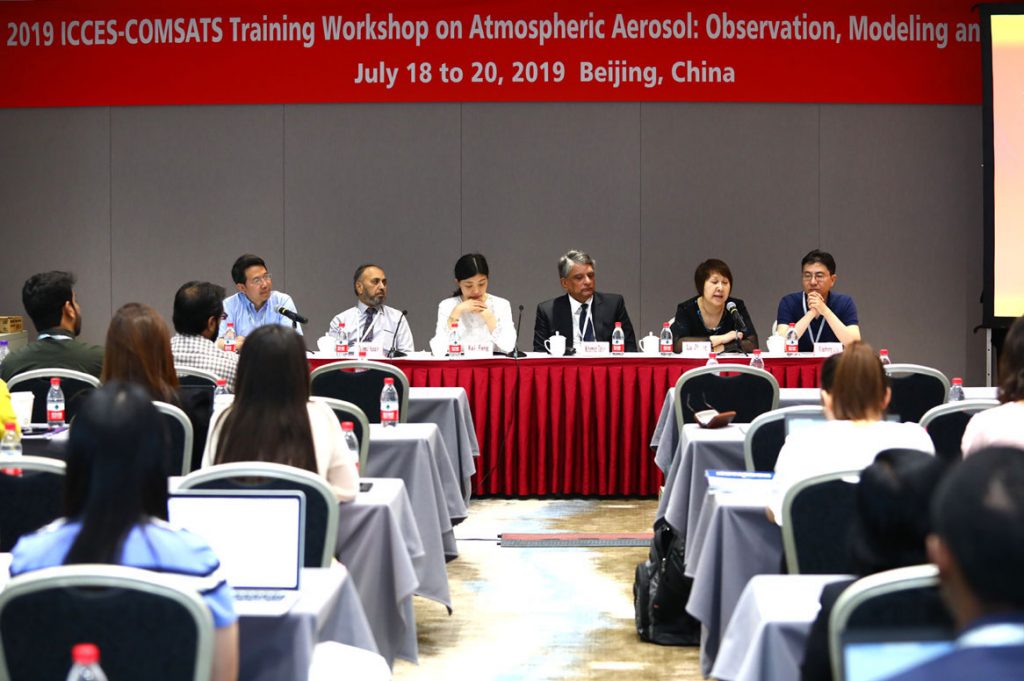 ain, Advisor (Programmes), and Gen (R) Muhammad Tahir, Advisor (China Desk), visited People’s Republic of China from 14th – 18th July 2019. The purpose of the visit was to participate in two international scientific events on atmospheric aerosol and climate change, organized by the International Centre for Climate and Environment Sciences (ICCES), China, as well as to reinforce ongoing collaboration with COMSATS’ focal point and Centres of Excellence in China.

The technical proceedings of the event comprised of three technical sessions during which keynote talks and lectures were given by eminent scientists on the following topics: aerosol-climate interactions; aerosol observations; and aerosol modeling and representation in ESMs. Around 41 distinguished scientists and researchers from USA, China, Israel, Iran, Australia, Vietnam, Palestine, Thailand, Pakistan, Germany, Kazakhstan, Senegal, and Indonesia, presented their scientific papers during the Symposium.

The Symposium was followed by the launching of the International Network on Climate and Environment Sciences (INCES) on 17th July 2019. While addressing the audience at the inauguration, Prof. Zhaohui Lin, Director, ICCES, stated that INCES, established with the patronage of CAS, aims to provide a collaborative platform to the network members in Belt and Road Countries. He added that the Network will facilitate data sharing, training of early career scientists for capacity building, and foster mutual scientific collaboration for the study of climate change impacts, observation, and prediction of climate and environmental extremes. 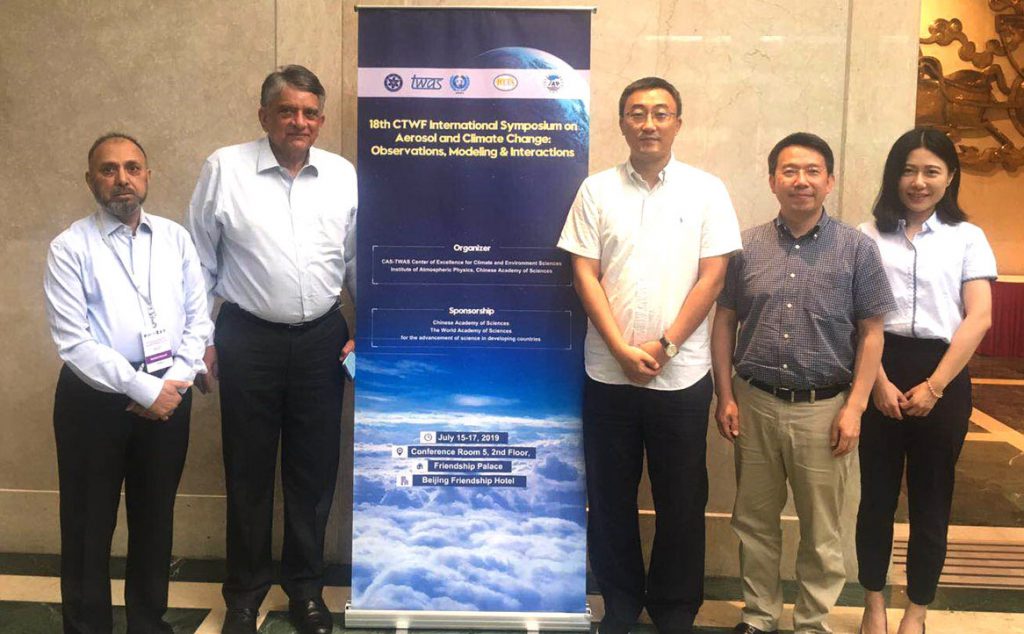 It was informed that a Technology Park has been set up by CAS in COMSATS host country, Pakistan, in collaboration with the Chinese Ministry of Science and Technology (MoST). Furthermore, the possibility of replication of China-Pakistan Earth Science Center (ESC) in other member states of COMSATS was also discussed upon during the meeting.

The matter of COMSATS membership to the Alliance of International Science Organizations in Belt and Road Region (ANSO) was also touched upon during the meeting. It was communicated that ANSO will set-up 2 – 3 regional centers and expand its membership from 37 to 100 in the next four years.

In order to enhance cooperation in academics, it was proposed that COMSATS University Islamabad (CUI) may collaborate with the University of Chinese Academy of Sciences (UCAS) and University of Science and Technology of China (USTC) for short-term visits, mutual exchanges and various collaborative programs.

COMSATS’ member states and Centres of Excellence were encouraged to avail the various opportunities available under CAS President’s International Fellowship Initiative (PIFI) and ANSO fellowship and scholarship program. The meeting ended with the assurance of support from Chinese side towards COMSATS operations.

The second event, International Training Workshop on Atmospheric Aerosol: Observation, Modelling and Impact, was held from 18th – 20th July 2019. The Workshop was jointly organized by ICCES, IAP/CAS and China Meteorological Administration (CMA) with the sponsorship of CAS, COMSATS, The World Academy of Sciences (TWAS) and MoST, China. The workshop was organized with the objective to build capacity of students and young scientists from developing countries including COMSATS member states with a view to engage them in aerosol observation and conduct research on related issues.

At the inaugural of the workshop, Gen (R) Muhammad Tahir spoke on behalf of Executive Director COMSATS, Dr. S. M. Junaid Zaidi, who considered aerosol pollution the most significant factor contributing to the global changes in climate and emphasized studying the causes and impact for generating solutions and mitigation strategies. He appreciated the R&D activities being undertaken at ICCES under the stewardship of Prof. Zhaohui Lin, Director of ICCES. Gen (R) Muhammad Tahir also lauded the efforts of Prof. Lin and his team for the successful organization of the Symposium.

Speaking on the occasion, Prof Lin considered the workshop extremely important in context of meeting the scientific needs of developing countries, in particular the Belt and Road Countries. In her inaugural remarks, Ms. Kai Fneg, Deputy Director, Division of International Cooperation Bureau of International Cooperation, CAS, stated that CAS attaches great importance to international cooperation and considers it an effective means to maximize potentials and resources worldwide to advance science for addressing global challenges.

The training was followed by an educational visit to the various facilities of National Satellite Meteorological Centre of China Meteorological Administration (CMA) and the Institute of Atmospheric Physics of Chinese Academy of Sciences (CAS). 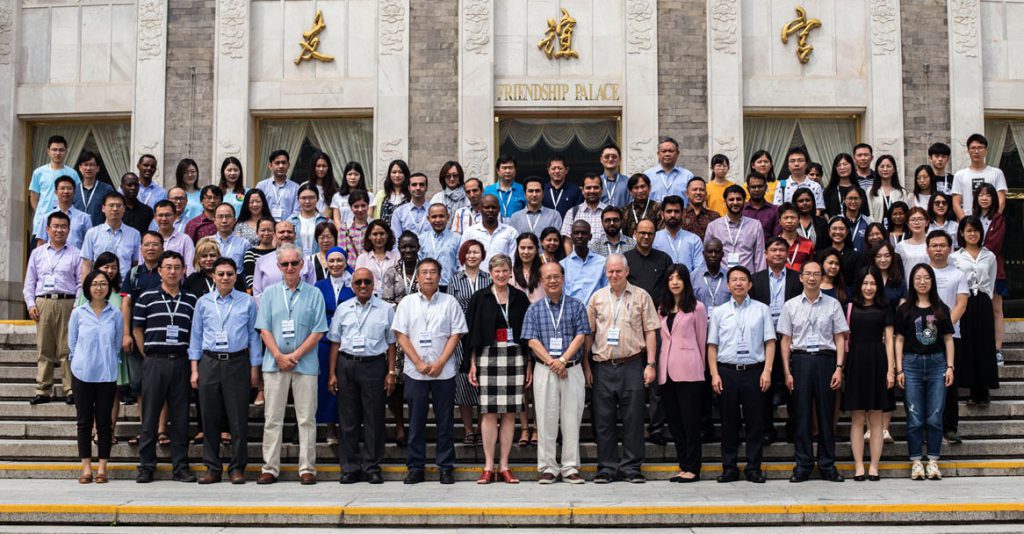