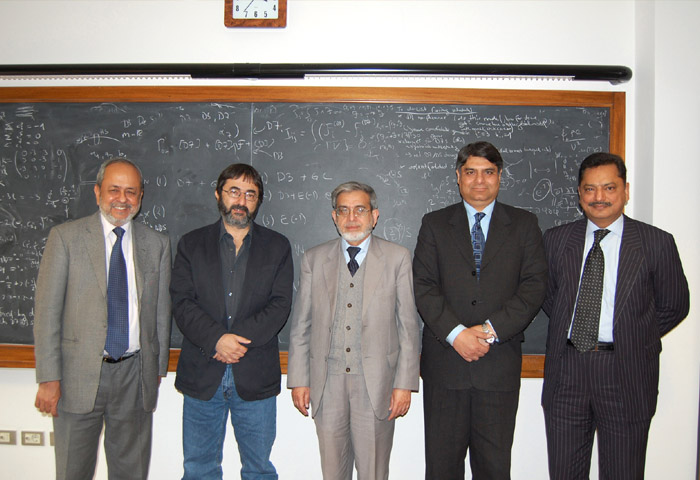 retical Physics (ICTP) on February 02, 2012. The ICTP and COMSATS, both being the brainchildren of Prof. Dr. Abdus Salam, share the objective of scientific advancement in the developing world. As a major force against the scientific brain drain from the developing world, ICTP provides scientists from developing countries with the continuing education and skills by imparting training in topics falling under the categories of High Energy, Cosmology and Astroparticle Physics; Condensed Matter and Statistical Physics; Mathematics; Earth System Physics; and Applied Physics. Each year, ICTP organizes more than 60 international conferences, workshops, and numerous seminars and colloquiums.

The Director ICTP pledged the Centre’s help towards CIIT within its framework, inter alia, through its Federation Scheme and Training and Research in Italian Laboratories (TRIL) programme. TRIL Programme of ICTP gives scientists from developing countries, Central and Eastern Europe the opportunity to spend periods ranging from a few months to one year at Italian research laboratories of universities, governmental and private institutions, which operate in different branches of Physics. This includes academic studies as well as practical applications and industrial projects. On the other hand, the 3-year agreements under Federation Scheme enable the signatory scientific institutes to send junior scientists to ICTP for two to five months, on a cost-sharing basis. CIIT is one of the 105 scientific institutes in 34 States to have an agreement with ICTP under its Federation Scheme. On invitation from the Rector CIIT, Prof. Quevedo accepted to visit CIIT during 2012.

Furthermore, the Director ICTP assured the Executive Director COMSATS that ICTP’s Aeronomy and Radiopropagation Laboratory (ARPL) will be glad to assist the COMSATS’ International Thematic Research Group on ICTs in its research undertakings.

During the discussions with the ICTP officials, understanding was reached that ICTP officials will provide assistance to CIIT in establishing departments/centres for meteorology and climate research, applied physics (particularly in Lasers and Optics) and biophysics. Moreover, young faculty of CIIT was invited to visit the Climate Change group of ICTP during 2012. Also, training was offered for CIIT faculty on Liaison with Industry.