The 3rd General Meeting of COMSATS successfully concluded in Accra 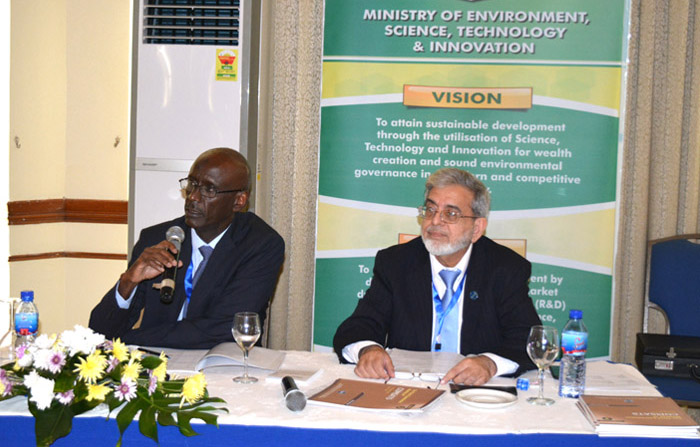 During the meeting, the heads of delegations made country statements, indicating S&T vision of their countries and re-iterating their respective government’s commitment to support the programmes and activities of COMSATS. The statements made provided guidance to COMSATS Secretariat in determining priorities of the Member States and developing new programmes in order to address their scientific needs. Earlier, the Executive Director COMSATS presented an overview of COMSATS’ activities and future plans in the light of COMSATS Strategy (2012-2016), which highlighted numerous initiatives taken by COMSATS for science-led socio-economic uplift of its Member States.

During an open forum for discussion on ‘South-South cooperation issues and COMSATS’ future programmes’, the need for preserving genome and biodiversity resources and safeguarding intellectual property rights of the developing countries was highlighted. In this regard, Turkey offered its help to other Member States of COMSATS in setting-up frameworks for the protection of their intellectual property rights. Moreover, keeping in view the fact that Cyber Security is an important global consideration in the wake of ever increasing use of ICTs by organizations, businesses and general public, the establishment of a ‘National Centre of Excellence in Cyber Security’ in Pakistan was proposed. The Centre will have the objective of facilitating the Member States in building their capacities and formulating relevant laws, legislations and policies, with a view to reducing and eventually eliminating cyber crimes.

While discussing the existing programmes of COMSATS, the Member States pledged to join, and actively participate in the International Thematic Research Groups of COMSATS, which constitute the lynch pin of COMSATS’ Strategy. The Member States also pledged to nominate appropriate experts and scientists to join COMSATS’ Panel of Experts on Science, Technology and Innovation Policy; COMSATS Distinguished Professorship Scheme; and Panel of COMSATS’ Science Ambassadors. Pakistan invited other Member States to benefit from the experience of COMSATS Institute of Information Technology (CIIT), Pakistan, in setting up the COMSATS Technology Park as well as Incubation Centre.

Under the agenda item concerning mobilization of financial resources for COMSATS, the delegates pledged to sensitize their respective governments regarding the benefits of regularly making annual membership contributions to COMSATS, as well as to mobilise financial resources for COMSATS’ Endowment Fund. In this regard, the draft Rules and Regulations of COMSATS Endowment Fund, prepared by COMSATS Secretariat, were approved by the Commission. The participants appreciated the Government of Pakistan for its generous and continued financial support to COMSATS for the past 21 years, as well as its commitment for extending its financial support for COMSATS’ future activities. The Member States also agreed to raise the matter of placement of representatives of Member States at COMSATS Headquarters with the concerned authorities in their respective countries, in order to enhance the effectiveness of the organization’s programmes and activities.

Other important decisions made during the Meeting included approval of the Statutes of COMSATS, as well as re-election of H.E. John Dramani Mahama, President of Ghana, as COMSATS’ Chairperson for the next three years. It was agreed that the next meeting of the Commission will be held in 2018.

A resolution was adopted by the Meeting, which inter alia included pledges by the Member States to: continue extending their full support to the Commission in its efforts to promote the integration of S&T into Member Countries’ national and regional development plans for achieving rapid socio-economic development in the South; increase the allocation of funds for strengthening the S&T capacities of their respective countries and make full use of COMSATS’ platform in these efforts; ensure the allocation of sufficient funds for the COMSATS’ Centres of Excellence based in their own countries, to enable their effective participation in COMSATS’ programmes and activities and their transformation into international level Centres of Excellence; and promote the objectives and programmes of the organization at national and international levels; as well as devise effective frameworks for disbursement of adequate financial contribution to COMSATS on voluntary basis.

The Meeting concluded with the pledge by Member States to strengthen their communication channels with COMSATS Secretariat, in order to advise the organization regarding their scientific priorities and needs, with a view to enhance the effectiveness of COMSATS’ programmes and activities.