Visit of COMSATS’ Delegation to Scientific Institutions in Italy and Turkey

During a week-long interactive training at The World Academy of Sciences (TWAS), Trieste, Italy, the delegates availed the opportunity to visit TWAS’ sister organizations i.e. Organization for Women in Science for the Developing World (OWSD) and The InterAcademy Partnerships (IAP), as well as research centres housed in Trieste, i.e., Abdus Salam International Centre for Theoretical Physics (ICTP) and International Centre for Genetic Engineering and Biotechnology (ICGEB).

At TWAS, COMSATS’ officials received a warm welcome from the Executive Director, TWAS, Prof. Dr. Romain Morenzi, who expressed satisfaction over the long-standing relations between COMSATS and TWAS. He noted that the partnership is moving in the right direction for the advancement of science in developing countries. COMSATS’ delegation complimented the excellent leadership and vision of Prof. Morenzi for the promotion of science for sustainability especially in the developing world. 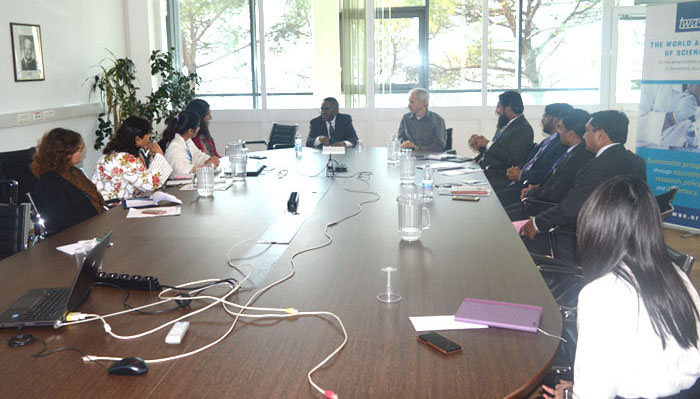 Prof. Murenzi introduced TWAS as world-leading institution dedicated for shaping the science agenda, promoting science for sustainability, and facilitating capacity-building in developing countries. He highlighted the milestone achievements and developments of TWAS during the last few years that have transformed it from an association of scientists to the voice of science in the developing world. The delegation was informed that TWAS has increased its membership of fellow scientists dramatically from a few dozen to currently more than 1,000 worldwide; launched various awards, grants, fellowshi science-lagging developing countries.

Later, TWAS senior officials briefed the delegation about various programmes and initiatives of TWAS. The presentations delivered by TWAS officials were the principal starting points for deliberations, which together with the interactive discussions, enabled the delegation to learn the professional practices being followed at TWps and regional initiatives for capacity-building and training of young scientists from the least developed countries (LDCs); andAS. Representatives of TWAS and COMSATS’ delegation also held one-to-one meetings and had productive discussions on various departmental affairs of mutual interest. The delegation gained insights into the principles, policies and practices developed for TWAS’ programmes and activities as well as individual management approach of the officials. During the one-to-one meetings, the two sides discussed and exchanged ideas on the progress of COMSATS-TWAS previous activities and possible ways for promoting further cooperation on issues such as collaborating on joint scientific meetings and research grants; exchange of professors and fellows; supporting joint fellowships; and ensuring regular reciprocal representation in statutory bodies’ meetings, etc.

The delegation also met Dr. Tonya Blowers, Programme Coordinator, and other senior officials of the Organization for Women in Science for the Developing World (OWSD). These officials intimated the delegates about the Organization’s goal to promote women’s access to science and technology, enhancing their greater involvement in the decision-making processes for development of their countries and in the international scientific community through research training, career development and networking opportunities.

On 16th March 2018, the delegation visited ICTP and held a meeting with Dr. Sandro Scadalo, Head, Scientific Programmes and Outreach, ICTP. The meeting was also attended by Dr. Clement E. Onime, Team Leader, Information and Communication Technology (ICT) Infrastructure. Dr. Scadalo gave a brief presentation on ICTP’s recent initiatives, including scientific and training activities, which stimulated a productive discussion among the attendees of the meeting about scientific and technical issues relating to the ICTP’s activities, which are of interest to COMSATS Member States.

The delegation also toured the Scientific Fabrication Laboratory (SciFab Lab) of ICTP, which is equipped with low-cost, state-of-the-art and versatile computer-controlled rapid prototyping tools such as 3D printers, 3D scanners, laser engraving and cutting machines. In response to the delegation’s proposal of replicating this SciFab lab at COMSATS’ Centres of Excellence, it was apprised that SciFab lab is the cheapest investment for creating new possibilities in STEM (science, technology, engineering, and math) education.

The delegation also visited the Centre’s Marie Curie Library, the largest collection of literature in physical and mathematical sciences. The delegation was informed that the library contains around 72,000 books including Abdus Salam books collection as well as 120 subscriptions to print journals and electronic access to 3,177 journals. The Library also houses scientific works, personal objects and photo albums of Prof. Abdus Salam.

On 16th of March 2018, COMSATS’ officials were warmly received by Ms. Mariana Maculan at International Centre for Genetic Engineering and Biotechnology (ICGEB). After briefing on the Centre, Mr. Lawrence Banks, Scientific Coordinator showed around various laboratories and research units housed at ICGEB. 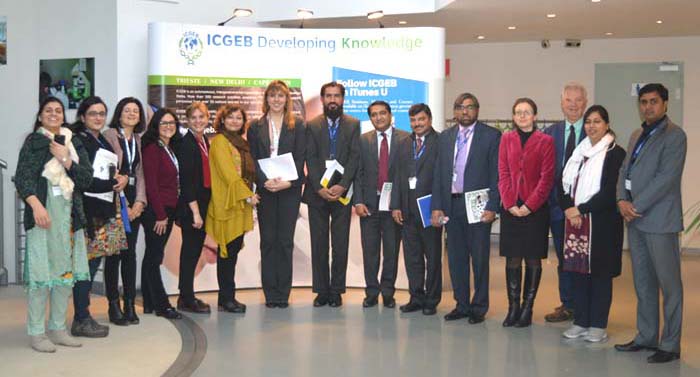 The visit to the Italian organizations was followed by a visit to COMSATS’ Centre of Excellence in Turkey, TÜBİTAK Marmara Research Centre (MAM). The delegates received a briefing on the Centre and its departments by Associate Prof. Dr. Murat Makaraci and his team. Later a visit to the Genetic Engineering and Biotechnology Institute and the Technology Park within the same premises was arranged. The delegates learnt about the advancement Turkey has made in the fields of science and technology and the contribution of Marmara Research Centre in Turkey’s national development in this regard.

The delegation was also shown some applications and products developed by TUBITAK in food, chemical, defense and energy.
The visit of COMSATS’ delegation resulted in useful exchange of information and best practices.